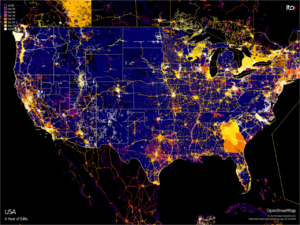 Please respect the copyright of these sites.

More detail on the TIGER page

The Tiger road data is imported.

The TIGER data are in the public domain - http://www.census.gov/cgi-bin/geo/tigerfaq?Q11 .

US Fish and Wildlife Service

USFWS is a bureau of the federal government operated by the US Department of the Interior. USFWS makes cadastral data available at the USFWS Geospatial Services site. Refuges are accessible to the public for activities such as boating, hiking, hunting and fishing, so they are very relevant to OSM.

Many national forests have GIS data available for download. A statement from region 6 (Pacific NW) http://www.fs.fed.us/r6/data-library/gis/disclaimers.shtml says that the data are public domain. Unfortunately each forest seems have their own index of data and data organization. There are some files very relevant to OSM (trails; recreation points listing campsites, docks etc) and some not so useful to the normal OSM reader (owl and fish habitats).

The National Park Service has a data clearinghouse often with trails (some historic paths) rivers, roads and often with very high resolution orthophotos.

The USGS has a centralized database ( http://seamless.usgs.gov ) that contains many data sets, several that would be of use to OSM, including very detailed surface water data sets (rivers, streams, lakes, tiny ponds), dams, federal lands . The data are in the public domain ( http://seamless.usgs.gov/faq/general_faq.php#six ). However, they do request attribution of data to USGS, so it may require a followup to use in OSM.

Part of the USGS Data, the National Hydrography Dataset contains detailed information on nearly all waterways and bodies in the United States

Also a project of the USGS, the The GAP Analysis Program was conducted state by state initially and most recently on a regional basis. Relevant data includes landuse/landcover and stewardship/conservation lands, which includes military and DOD lands, and state/federal/local lands preserved for conservation purposes.

DOT homepage links for all 50 states. Check each for the GIS department, and statewide downloadable data.

Contains lots of data on US infrastructure. All data is public domain. (Shapefiles)

The FAA Digital Obstacle File contains coordinates and elevations, as well as some meta data for aviation obstacles in the united states. It is distributed from the DAICD. I believe that the data is public domain but the CD is sold as a subscription; someone like myself who has the CD could theoretically import the data into OSM without violating copyright. (TODO: double-check IP status.) Update: As of April 2015, the file is available online at [1].

The DOF would be a useful way to populate the map with aviation-chart-related items, particularly ones that can also serve as landmarks: smoke stacks, antennas, etc.

Much aviation data is maintained at nfdc.faa.gov.

http://www.clui.org/clui_4_1/index.html Information identifying weird landuses spotted in aerial imagery throughout the U.S. Non-profit organisation. No copyright information on their website. Didn't contact them (yet). Maps (approx landuse pinpointing) on the site uses google maps. May be use-able for vague identification purposes.

Adding the list of mines and quarries in the USA from here:

Note, I have started the process to import this data, but I accidently overwrote the names with josm. Now I am working on modifying the names. https://www.openstreetmap.org/browse/changeset/3345627

This site contains a huge amount of data possibly useful to OSM. Place names, political boundaries, hydrology, etc. Most data is USGS collected and is public domain, however the site "Web Policies" page states that copyright must be inspected for each data set.

Note: Many of the shapefiles on nationalatlas.gov, particularly fedlanp020.shp and its derivatives, are horribly inaccurate (the resolution is low). Please avoid importing any more of it onto OSM! Users have found boundaries as much as a mile off from their true location. See this diary post.

Wilderness.net gathers US Designated Wilderness area definitions from the US Forest Service, Fish and Game, National Park Service and Bureau of Land Management into a single data set available for free download as Shapefile or KML.

The NTAD maintains various datasets associated with transportation in the US.

The NOAA Office of Coast Survey maintains a database of wrecks and underwater obstructions. [2] The data itself is useful for a nautical chart like in the OpenSeaMap project. After confirming with NOAA via email, the data is indeed in the public domain and therefore can be imported into OSM.