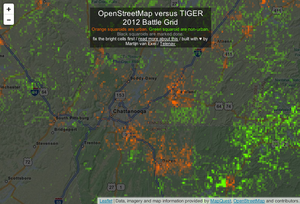 The Battlegrid showing good fixup progress in Chattanooga, but not so good in neighbouring Cleveland

TIGER Battlegrid was a TIGER fixup tool which shows colourful grid squares (orange for urban, green for countryside) for parts of the U.S. where more fixup work is needed. This was calculated by comparing OSM data with the newer TIGER 2012 data.

Battlegrid was developed and operated by Martijn van Exel and introduced in 2013. The code was subsequently lost, but Martijn began recreating the tool in 2019. [1]