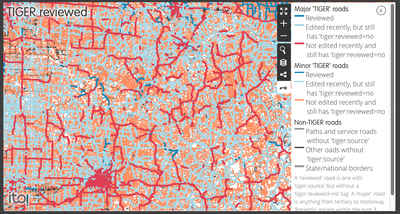 zoomed out showing Missouri. Orange roads have not been edited since the original TIGER import 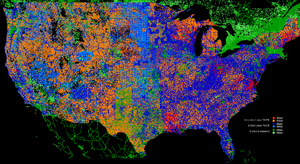 A low zoom stitched map using an earlier version of ITO world's map with slight different colors:
green or light green was what is now dark blue (reviewed), light and dark blue was what is now light blue (edited but unreviewed), orange and red have the same meaning now (imported without any correction and review).
This old color scheme was updated in order to be more accessible to the most common kind of color-blindness in the male population (red/green, notably for unsaturated light colors), and better emphasizing the reviewing work. 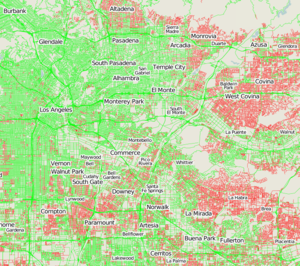 An earlier version of the TIGER edited map, with simple Red and Green (showing LA)

The TIGER Edited Map showed which areas have been edited since the TIGER import (for the United States).

It is no longer available in either the Mapquest or ITO world hosted variations, and unless/until someobody reimplements this idea, and with TIGER Battlegrid also discontinued, there are no good alternatives to get an overview of TIGER fixup progress. #Alternatives only include running localised overpass query.

In December 2011, ITO World added a regularly updated TIGER Edited Map layer to ITO Map, and this superseded the MapQuest one which wasn't being updated. This version also gave a break down by minor and major roads and indicated whether the map has been edited without the reviewed tag being removed. [2]

The major automated TIGER imports are now complete (newer imports use another method based on external validators suggesting changes to perform in OSM).

Since the original TIGER imports many roads have been fixed, and in some areas they have been completely redrawn more precisely and TIGER data is no longer used as a geometric reference: you will see these areas showing most roads in black (or gray for major roads). But occasionally, a bot could try to reassociate the new roads in OSM (in selected areas) with TIGER identifiers: this should happen only on major roads, turned from grey to dark blue (i.e. without adding the unreviewed tag), or because some contributors have reassociated the TIGER identifiers manually after comparing surveyed roads in OSM with recent TIGER sources, or because they have used some QA tools to assist them in this resynchronization process.

As with the rest of ITO Map, the TIGER Edited Map was discontinued in July 2019.

Pan and zoom to the area of interest. Colors will only appear at zoom 8 and above.

You will probably no longer find any grey lines as they are normally part of TIGER data and should be reviewed (i.e. show as dark blue). If this is not the case, there was a problem identifying in TIGER data that gray road currently drawn in OSM, or its geometry was corrupted in OSM.

"Edited" means a user has done something to cause the way elements to have a new version number. Either their tags have been changed, or they have been created (or re-created in a split/merge operation) The map does not show nodes, and in fact moving the nodes of a way does not count as editing the way (a technical limitation of this map).

The map was updated with refreshed data from OpenStreetMap on a schedule of approximately "a few weeks". (TODO: more precise information from ITO or through experimentation) It could be complicated by layers of caching including browser caching, but in any case when you make edits you could not expect to see that area of the map to change colour immediately.

Note that the site contained some information about "Updates" and says "Updated on 14 September 2012", however that related to changes made to the map configuration and colour choices. These were not updated since 2012 (which doesn't matter!).

What does it mean?

Obviously the idea is to visualise which areas people have been working on in the United States. Any area which is not showing up blue on this map, most likely needs some work: they have been imported as is, but still not altered (i.e. shown as orange).

Some TIGER data may not require any modification, but actually this is relatively rare (only removing the initial unreviewed tag would turn them directly from orange/red to dark blue). The quality of imported data is such that it pretty much all needs fixing up, with corrections to the positional accuracy (position roads over aerial imagery) because this data was not intended to createa a map but only to manage surveys, and also various topological fixes (primary vs. secondary, tertiary or residential; junction links; oneway restrictions and separation of oneway lanes where needed): this will turn them from orange to light blue before review. For more instructions on this, see the TIGER fixup page.

The map should ideally turn to dark blue (like what is done in dense metropolitan areas with many active contributors or in some rural areas explored exhaustively by local interested contributors).

The most important work is first needed on fixing old unreviewed imported highways (orange/red) whose data is more probably outdated and very imprecise, and on rapidly fixing gray lines which were probably corrupted or redrawn from scratch (after possibly deleting the initial TIGER-imported highway) without reviewing them (this could also be caused by an outdated/incomplete/very imprecise TIGER data source).

Reviewers will be interested in checking the light blue lines which are roads with recent unreviewed edits, to turn finally them to dark blue (by dropping the initial unreviewed tag), once all needed fixups have been checked. It turns out that these roads are mostly concentrated in important metropolitan areas where there are more frequent edits by more active users adding many details missing in the TIGER data source, but some rural states have small but active contributors doing an excellent job there (e.g. in Northern Texas where the density of roads is not very high, their geometry is relatively simple requiring fewer fixes, and the reviewing task is easier to complete exhaustively by fewer contributors).

It's a massive amount of work, but who said creating a free world map was going to be easy? The idea of the OpenStreetMap project is to attract huge numbers of people who come together, each volunteering a little bit of time, because many hands make light work! If you live in a orange area, why not spend 10 minutes to turn your neighbourhood blue? Maybe you'll fancy spending half an hour on pushing back the blue boundary for a few miles radius. It's a matter of pride isn't it?

Bored of that? Well there's other kinds of fixup to do. Try using the Keep Right tool or other Quality Assurance tools to seek out and squash other types of data bugs. Alternatively maybe it's time to get out from behind your computer screen and take a look at the world! OpenStreetMap gathers all kinds of Map Features from supermarkets to post boxes, by going outside and making notes. The mapping techniques page describes some different ways of doing this, but in the U.S. this is very simple. We have great aerial imagery, and the basic road network is in place already, so a simple technique of noting down positions on a piece of paper will work just fine. Get your friends and family to join in. Do a bit of a promotion in your area. Pretty soon the best map in the U.S. will be a free and open map!

In addition to roads/highways, the TIGER import included rail, but with what are now considered to be some odd tagging conventions (especially since the 2013 launch of OpenRailwayMap). Needing review similar to roads/highways, "somewhat noisy" and over 15 years old, these TIGER rail data are largely being reviewed in an ongoing methodology documented at United_States/Railways. It details strategies and specific steps to be taken to complete TIGER Review of rail and links to the growing list of statewide /Railroads wikis. About half of the states in the USA have some sort of /Railroads wiki (which include both freight and passenger rail sections), even if the wiki and TIGER Review are in an early state of completion, as many are. As of early 2022, an estimate of fully TIGER Reviewed rail in the USA might be about 75% complete, so there remains a great deal of work yet to do. Why not start a /Railroads wiki in your state? Or, check out your state's /Railroads wiki and see how much TIGER Review is left to complete: many contain color-coded tables for an at-a-glance view of TIGER Review status.

Sophox can query for unreviewed or unedited TIGER ways across the entire country on demand. See the example queries for counties and ZIP codes with the most untouched TIGER ways.