TIGER 2012 data became available August 17, 2012. It is a newer more accurate dataset than the older TIGER data (TIGER 2005) which was originally imported into OpenStreetMap. Although the TIGER 2012 will probably never be imported directly (as explained on the TIGER page) it can be used as a source to guide mappers, or for manual "merging".

The TIGER Battlegrid ([2]) uses TIGER 2012 data to make a broad brushstroke comparison to indicate large areas (grid squares) where OpenStreetMap data seems to be most heavily out of whack. Usually this reveals areas where the OSM data is out of alignment with reality because it's an area of particularly poorly aligned data from the older TIGER dataset, where nobody has done any TIGER fixup work. Use the Battlegrid tool to locate these areas and fix things up! However when you come to work on fixup at the detailed level you may also like to use...

The TIGER 2012 shapefiles were processed into tiles that display roads as lines with the names appearing along side them. The tiles have a transparent background so they can be loaded over the top of an imagery layer (Bing, etc.) to aid in tracing roads. This tile layer is being served up from the OSM-US tile server and is available as an imagery preset in both JOSM and Potlatch2 under the title "OSM US TIGER 2012 Roads Overlay." If you need the tile URL for some reason, it is:

*JOSM note: The "[16,19]" in the URL above specifies the minimum and maximum zoom. Without this, the TIGER layer turns opaque gray if you zoom in too closely or out too far. (See Alan Millar's comment on Talk-US, Sep. 21, 2012.) 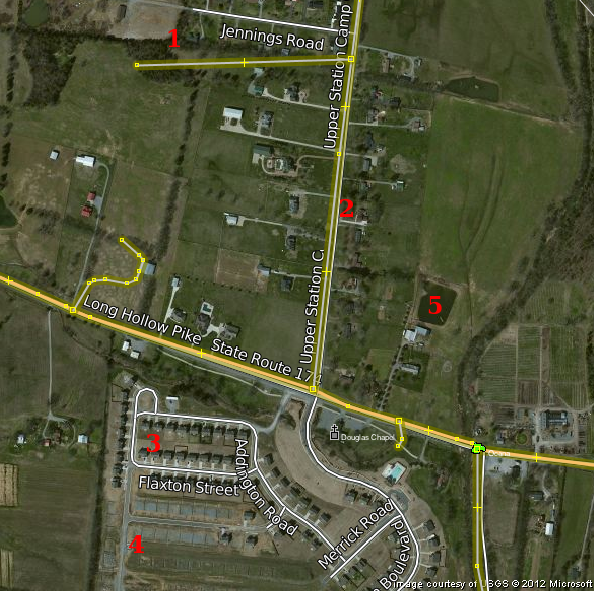 1 - Minor residential roads can sometimes be wildly inaccurate in the older TIGER data (in OpenStreetMap)
2 - Bigger roads here are also a little offset to the West (as indicated by both bing imagery and TIGER 2012)
3 - TIGER 2012 data is newer. Here we see several new streets missing in the OSM data
4 - Although with bing imagery we also see new streets missing even in TIGER 2012
5 - ...and of course features which are not in TIGER, like this small lake which we can add from bing

If you see a conflict between original TIGER data and data from TIGER 2012, chances are that the TIGER 2012 data is more accurate. Some TIGER 2012 may still be incorrect and misaligned, so use other data sources [gps traces, bing imagery] as other references points. Edits of local mappers should always be respected above TIGER data.

TIGER stores all road names in abbreviated format. "Ave" instead of "Avenue" and such. In OSM we prefer names to be unabbreviated. The above URLs point to tiles that have had the road name expanded based on TIGER supplied information about prefixes and suffixes on each named road. If there is a need to view the original TIGER names in their abbreviated form, use these URLs instead: