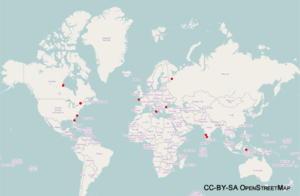 The Coastline error check used to include a map display. Screenshot showing errors in October 2011

The coastline error checker AKA "coastcheck" was a tool to convert OSM coastline data in the database to shapefiles for use in Mapnik. Before creating coastlines the tool performed a number of automated checks and also some automated fixes to the OpenStreetMap data to try to yield a fully joined-up coastline. It was also used to directly power a map display which allowed people to quickly see errors in the coastline, that map is currently offline and doesn't render any more, but alternatives are available and you can still get shapefiles of the coast line.

The source for coastcheck is available in osm svn.

Since the original coastline error checker map view is offline, the alternative is now the coastline view at OSM Inspector

If you're having a problem with an island that shows an error and you can't find anything wrong with it, check the scale. The coastline checker coalesces points that are very close together which sometimes means for very small islands you might drop below the minimal 3 points needed for an area. Check the scale in your editor and decide whether or not replacing it with a node with natural=pebble would be more appropriate.

Note: The tiles are currently generated on Hypercube which is not guaranteed to be around forever. Hence there is a need to find alternative hosting for the coastline checker tiles (not the main page). The main requirement is to have a daily updated planet dump to work from (Hypercube currently produces these, but if you have an alternative source, such as an existing database, perhaps something else can be arranged). After that it's about 2 hours of processing. This produces a number of shapefiles which then need a mapnik instance to serve. There are only two layers. This map is not used as intensively as the main map, so the load should not be too much.

Getting better performance than the current system should not be too hard. Contact User:Kleptog if you can help.

Current coastline files produced can be found at https://osmdata.openstreetmap.de/