The following editors are not currently in use - information is provided for historical purposes only, or for background information if you'd like to resurrect one of them.

The online applet works in any browser which is Java enabled. If you feel like using this tool you either have to upload a GPX file to the web site first, or work on a previously uploaded track.

Also remember that anything you do in the Applet affects live data, but if you are working on an area where no one else is working then I guess at present this is not too important as long as you correct any mistakes.

The immediate advantage of the applet is that if you have a Java-enabled web browser there is nothing further to download and you can start editing as soon as you have registered an account with OSM.

The online editor applet now displays Yahoo! Aerial Imagery under the GPX trackpoints while editing. This is very useful, and in fact more accurate than GPS data, in the areas where coverage is most detailed (cities). In other areas it sometimes may assist in determining what you are doing. Yahoo! has allowed us to include the imagery in this applet display, but not yet in other offline editors.

It is also fairly obvious how to add names to a way, and how to denote a way as either a motorway, primary road or secondary road.

The applet has aparently been made Protocol version 0.4 compliant with a patch by TomH, but was taken offline and replaced by Potlatch on the 'edit' tab before that.

The main disadvantage from my point of view on the online applet is its speed, it is rather slow if you are editing large amounts of data. 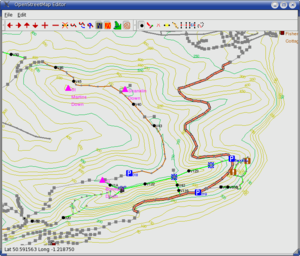 If you have access to a Linux or Windows machine you could try the Osmeditor. Osmeditor can read direct from a Garmin GPS on a serial port. (Note that the Windows version cannot yet communicate with a GPS device or display Landsat photos.) Alternatively it can download from OSM, or read a local GPX file.

It does have some nice features such as the ability to overlay height data as contour lines, and also to grab a Landsat photo of the area, and display this under the tracks you are working on.

The ability to read direct from a Garmin GPS.

The disadvantage to this is that for the Linux version you have to compile the software from source, so this may put some people off. I personally don't yet find it as intuitive as JOSM, but that's probably a matter of choice. 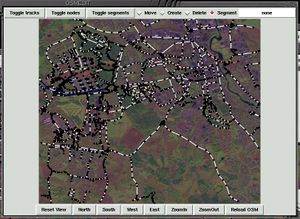 A Perl/Tk based editor, which probably runs best on UNIX-like operating systems. Source code is in Subversion. Needs updating to support ways. Doesn't display trackpoints from the server, but will look at a local GPX file.