So far OSM mapping has focused on urban areas, but this could be the year that countryside mapping takes off, particularly as there are Mapnik maps geared specifically for the countryside. 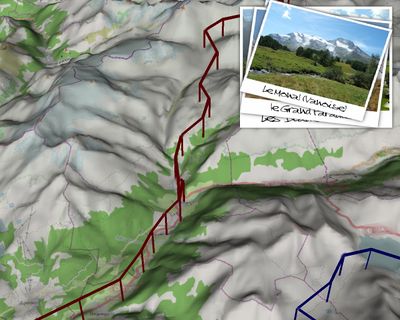 Video trailer of the Via Alpina - Summer 2012 mapping party: http://youtu.be/OWHevSDyoVo

During Summer 2012, a group of hikers from 4 countries (among which some members of Alpine clubs) will contribute to the OpenStreetMap project in quite a particular fashion. They will hike in the Western Alps for about 80 days, from Monaco (departure in June), up to Switzerland, and back to the South (ending around mid-August). See Via Alpina.

Having mapped all the roads of the Isle of Wight last year, we could now turn our attention to the footpaths, focusing particularly on the southern and western areas where the nicest scenery is.

Since the Lake District is one of the most popular walking areas in England, and arguably has the most dramatic scenery in the country, this could be an event which converts a lot of walkers to OSM. There are a range of footpaths covering high peaks, lower hills and valleys, so if the weather turns bad there's still lots of stuff to do.

A small, compact area with some dramatic coastal scenery and open downland to the southwest of Bournemouth. Lots of footpaths and amongst the most popular walking areas in central southern England. Quite a lot could get done in a weekend with a coordinated effort. There's also a few towns, and quite a few villages, if non walking OSMers fancy coming down too.

Thought of this one as I need an excuse for a walking holiday somewhere in mainland Europe :-) I've mentioned this already, and and several OSM people are in the area and have already expressed an interest in this.

Countryside to the north of Berlin (Germany)

A CCC camp event will be happening at the from august 8th to 12th 2007, mebbe we could do some heavy countryside mapping around there