The basics came from a discussion on talk-nl in September 2008, and it was fleshed out in the months after that. This tagging is currently in active use in parts of The Netherlands and Belgium - and now, 2021 also widely adapted in Germany.

This expanded tagging is based on the following real-world observations:

And the following OSM technical observations:

All numbered junction nodes in a network are tagged:

There is no need for a network=rcn tag anymore. rcn_ref=xx and the relationship of a network relation makes it clear enough. Some nodes are also part of other networks and may have rwn_ref=yy.

The routes that make up the network are part of a type=route relation:

In Germany there are also other routes than "Cycle node networks" tagged as network=rcn. They were there before CNNs appeared in Germany and they are not going away. Those routes tend to have a ref=2 or 3 LETters. The key network:type is used to distinguish the network routes from other regional routes.

The members of this relation are:

Split nodes and the tentacles extending the routes to connect them 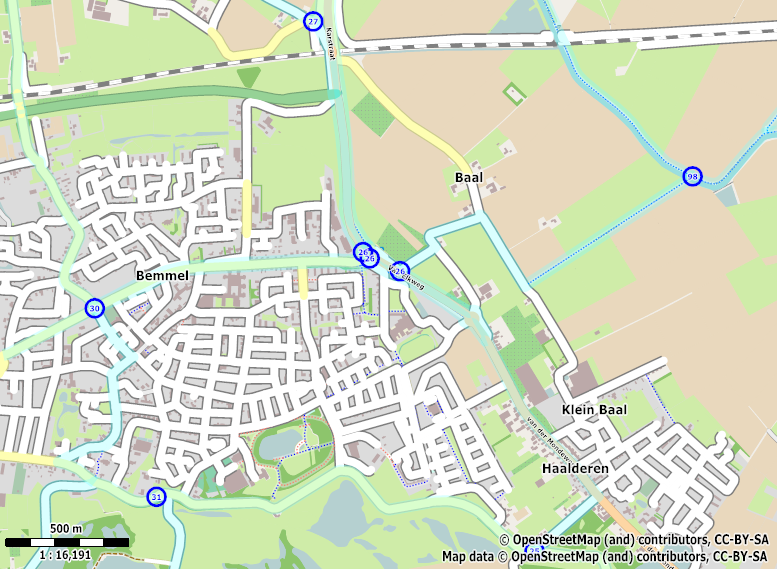 This is to give people an idea of the whereabouts of the split node we're discussing. 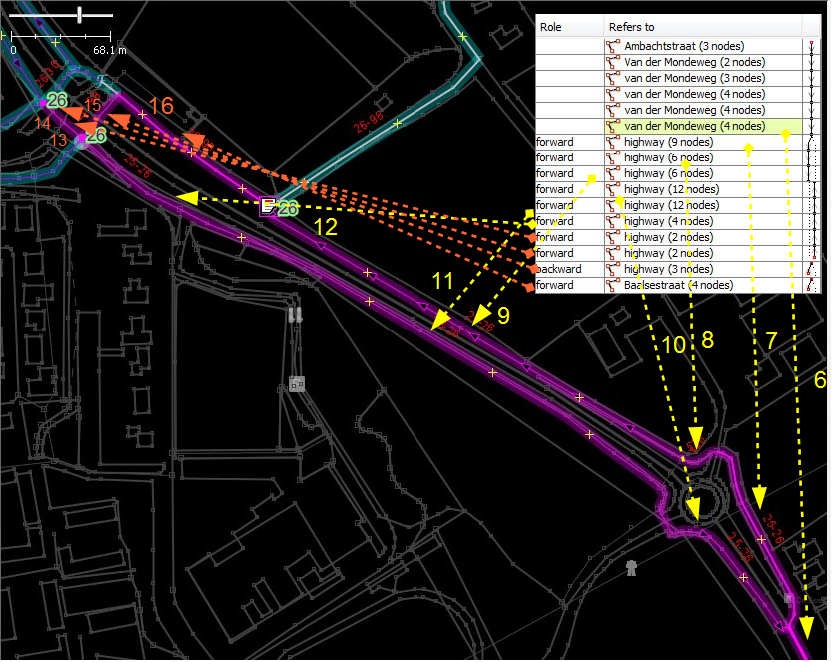 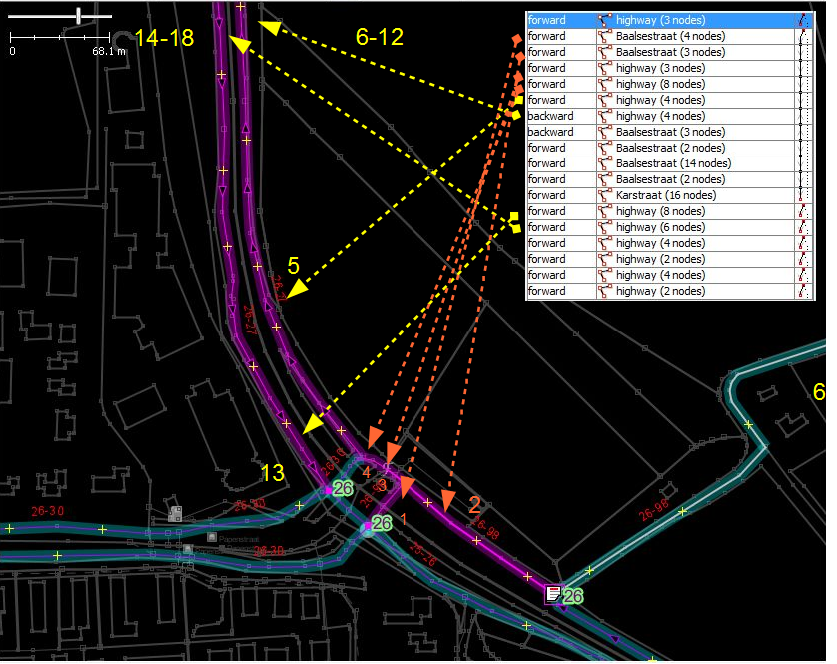 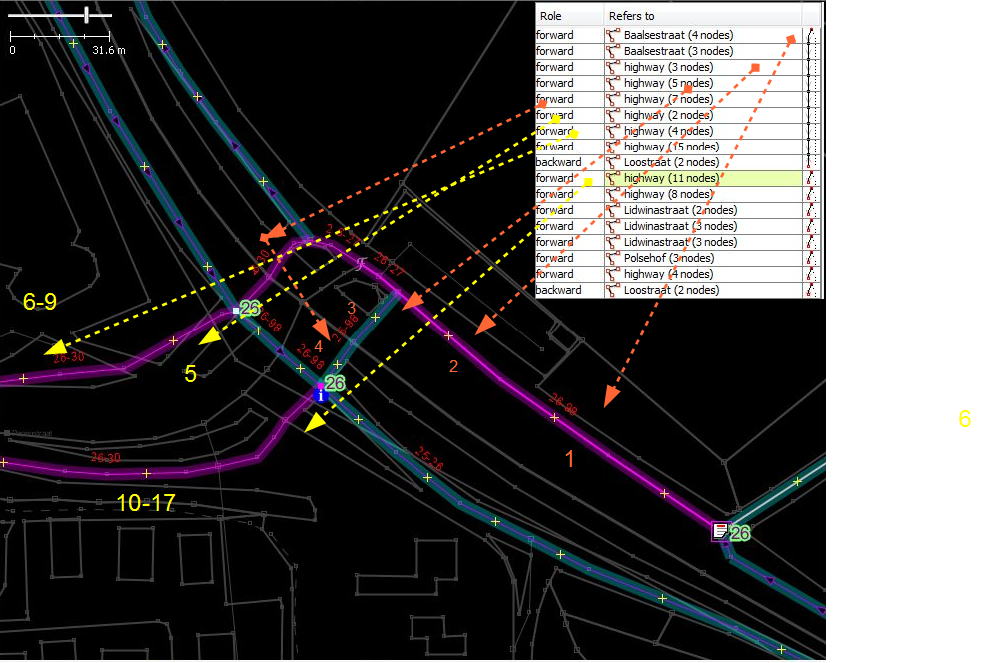 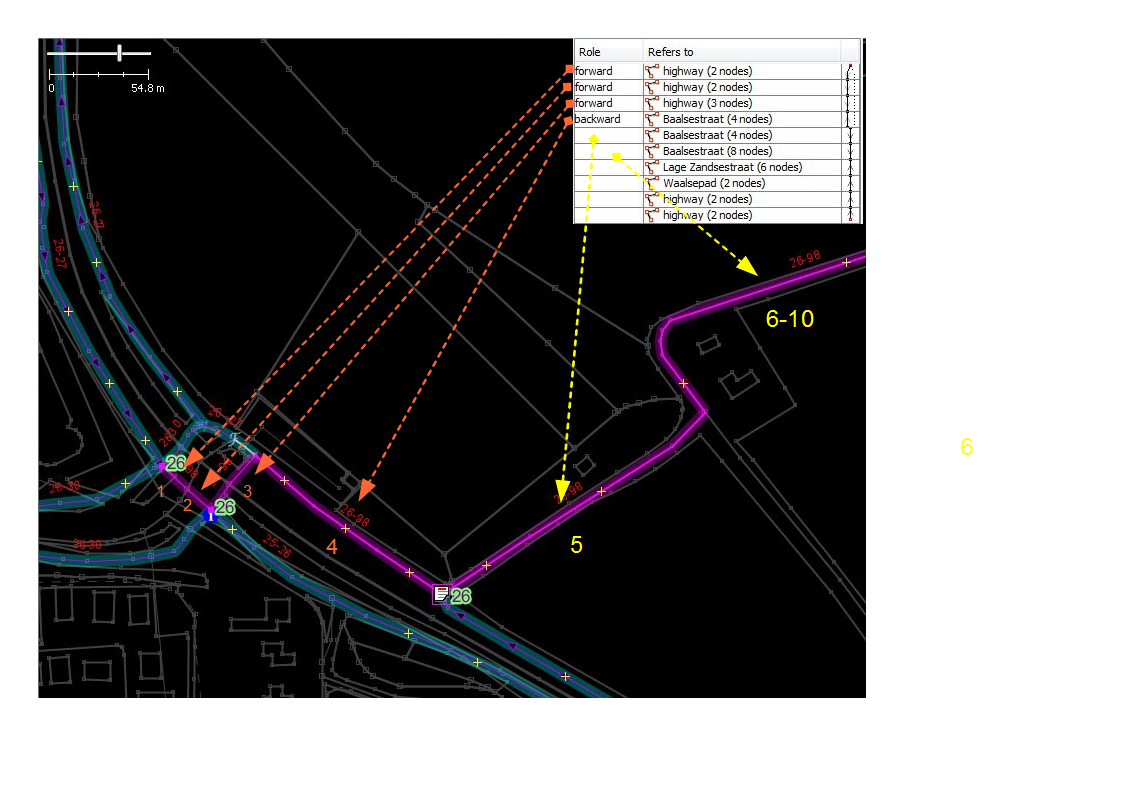 For somebody coming from 98 the first 26 they reach, is the end of their journey on that route. Regardless which way they want to go now, they can start following tentacles which will lead them to the following start of the route they want and then beyond.

One relation for each (named) cycle node network is created. This relation describes all elements of the network.

If a junction node is in two networks, which can happen in border areas, it is added to both of these network relations and it gets a role=connection role for consistency.

In some cases, a very large network is further divided in distinct areas (sub-networks). In this case, another relation of the above type can be created, which holds as members only the relations for the sub-networks. Example: the above network is divided in sub-networks, like "Oost Zeeuws-Vlaanderen" and "Schouwen-Duiveland". The parent relation then holds the name for the entire regional network, while the child relations hold the name of a particular part of the network. Junction nodes are (in theory, as exceptions do exist) uniquely numbered within a sub-network, but will most likely be repeated in the other sub-networks.

One relation for each collection of network relations is created. At the moment there is one for Belgium. One for The Netherlands will be created soon.

It can be used as a starting point to download all CNNs for a country from the servers, or as the starting point for a script to do some Quality Control. When downloading, only the relation will be downloaded, not all its members and submembers. RMB (right mouse button) Select members on the relation and then RMB Download missing members for all networks and after that for all routes, will result in a skeleton of the whole collection of networks and its routes and numbered junction nodes. After downloading the network relations, only the numbered junction nodes will be visible in an off line editor like JOSM.

It's the junctions that are named/numbered and part of a network.

In NL, the name used to be repeated on every route, but it's now set once in the network relation and the name tags are in the process of being removed

Sometimes the routes branch (due to cycle ways on both sides of a street, one way streets, roundabouts with split ways, etc), in that case first the ways going from lower number to higher node number are added with roles, until the place where the branches join again. Then the ways from where the split occurred go in with reversed roles. The end result is that when checking for continuity, one can take all the members with no roles and the first continuous set of members of a branch for checking the direction from low to high node number.

For the other direction (high to low), one can take all the members with no role and the rest of the members with a role that were not consumed in the previous step, then reverse the whole set of ways.

It is not important at this point whether this role is forward or backward. In fact the majority will be forward (due to oneway streets). What is important is the order of the members of the route relation. The first set after the branch belongs to the low->high group, the set after that until where the branches come together again belongs to the high-low group of members.
At the beginning and end of the routes some members can be found with roles too. They are 'hints' showing how to get from a split end node to the actual start of the route one wants to follow. (At the actual start of the route, there is either a numbered node, or all these tentacles come together there). The same applies beyond the end of the route (They are all in the process of being sorted from lower numbered node to higher numbered node) but in reverse.

See Python script which runs inside JOSM for an example implementation

user:polyglot made some styles and other tricks to make the editing of the cycle node networks in JOSM easier. You can find it here: User:Polyglot/Some_ways_to_simplify_editing_cycle_node_routes_with_JOSM