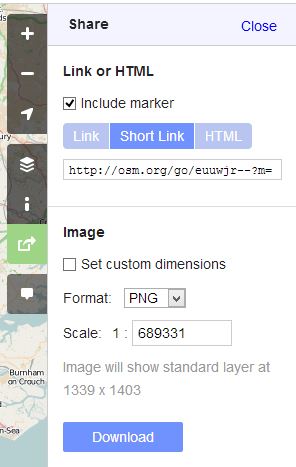 A shortlink is a link to a map, designed to be shorter than the normal URL. It can be generated by selecting the Shortlink option on the Share tab.

How the encoding works

The URL is composed of http://osm.org/go/ followed by a binary quadtile address, encoded in ASCII, with chars at the end to indicate relative zoom.

The binary address - for example 0101 - is used as follows. Imagine the lowest zoom tile - this contains the whole globe.

Now - the first bit is 0, this indicates it's the left half of the tile. The second bit being 1 indicates it's the bottom left half in combination with the first bit. The second two bits work the same, further refining the location to the tile that is one sixteenth of the area of the world-tile, on the very bottom-left. (Antarctica, From 45 degrees south down to the pole, and from 90 degrees west to 180 degrees west)

This binary address is then encoded in ASCII, and a few chars are added at the end to indicate relative zoom. The length of the code gives the zoom level rounded to the nearest 3 and the appended code specifies the remainder.

A marker pin reference for the centre of the map can be added to the shortlink by appending "?m", or by ticking the "Include marker" checkbox on the share tab, or if an alternative map layer or any other query has already been included use "&m". Using one of the above examples, http://osm.org/go/0EEQjE==?m will give the above view with a marker in the centre, http://osm.org/go/0EEQjE==?layers=T&m will give the above view but with the Transport layer selected and a marker in the map centre.

You can perform your own shortlink encoding and decoding, and it's worth noting that this is the fundamental advantage of using this URL format over other URL shortening services, where you are dependent on the continuity of that service. With these short links, the location information is truly encoded in the URL, and you can decode it algorithmically, without any database look-up, and independently of OpenStreetMap's servers. Unlike URL shortening services, we're not "using up" combinations of letters. We'll never need to make the URLs longer.

Source code for encoding and decoding shortlinks can be found in the following places:

If anyone has other language implementations, please feel free to link them here.