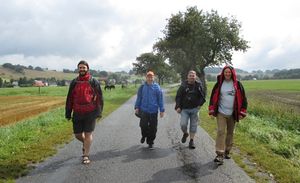 The Hiking group "North" is in a good mood after the rain showers gave way for a bit of sunshine.

The first weekend in September, about twenty mappers from Germany and Czechia met in a remote corner of Saxony for the 2nd Elbe-Labe-Meeting. Different from the last time, this years Elbe-Labe-Meeting was more of a mapping party. While the area is well-mapped generally, the extensive hiking network around there was in need of some work.

We had rented a holiday house for the weekend including mostly double rooms, a full kitchen, and plenty of common rooms to spread out to work, play, or relax. The house stands on top of the Ungerberg right where several hiking routes meet, making it the perfect location for our weekend. Originally some of us had planned to sleep in their tents on the property but after two days of (more or less) constant rain that didn't seem like such a nice option any more and we managed to fit everybody into the house.

After arriving on Friday afternoon, we quickly found a lot of volunteers for kitchen duty. Hanna and Thomas had gone shopping before and piles of boxes and plastic bags full of food and drinks were sorted into shelves and fridges in no time and then we prepared the meal together. The following dinner and the rest of the evening gave everybody a chance to relax after the sometimes long journey and to get to know each other.

...and after the weekend (Background: OpenTopoMap).

Improving your mapping skills is something best done in groups

Saturday morning started with a hearty breakfast with fresh bread rolls, hot coffee and lots of planning. Sarah, our resident hiking expert and creator of the waymarkedtrails web site, showed us the gaps in the hiking network in the area. Even though the weather wasn't that great, almost everybody joined one of the three groups spreading out to survey the neighboring hiking trails. The rest held down the fort, made another supply run and helped as taxi service for bringing mappers home. 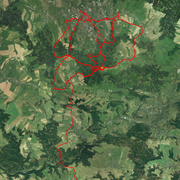 All together we walked about 60 kilometers of hiking trails. You can see most of the tracks in this image. The marked spot is at the Ungerberg.

The group "North" and "West" were back in the early afternoon, the group "South" apparently couldn't stop before reaching the river that gives this meeting its name and arrived only later. The rest of the day was filled with more cooking, barbecuing and eating and mappers sitting in front of notebooks adding the days catch to OSM. This, of course, included lots of discussions about the right way to map detours in the hiking trails, signposts or horse trails. These discussions (held sometimes in German, sometimes in Czech, most of the time in English) are what makes this kind of event so important for OSM. Yes, mapping is more fun to do together, but you can do it alone. But improving your skills, seeing how things can be done better (or just differently) is something you can best do in groups. Of course not all was work, the billiard table saw a lot of action, too, ...

The second day saw, again, three groups swarming out to fill in more gaps we had identified the day before. The group "Ungerberg" filled in some details around the house where the route of the hiking trail was recently moved; the group "Neustadt" spliced several routes together in the nearby city and the group "Lehrpfad" found the rest of a badly signposted nature trail. Again these were added to OSM among much discussion. After lunch last edits were done, bags were packed and sandwiches prepared and the group slowly dissolved.

So what is the result of this weekend? We checked around 60 kilometers of hiking trails. Many gaps in the routes were closed, many details corrected and amended. Having so many people allowed us to split up the work and still have good-sized groups to make the hiking itself fun, too. And everybody sees and remembers some details the others missed, so we could solve many cases where the course of the trail or the meaning of a signpost was ambiguous. The hiking network needs much more work, but we left the map of the area in much better order than it was before.

If you don't think yet that you missed a great event, have a look at our film and this film showing our tracks.

Many thanks to all the participants who made this such a great event, especially to the mappers from Czechia who followed our invitation from far and wide making this a much more diverse and interesting event. Special thanks to Hanna and Thomas who did most of the organizing and all the shopping and, of course, to the Wikimedia e.V. who sponsored the event. We hope to have a similar event next year, maybe in Czechia this time...