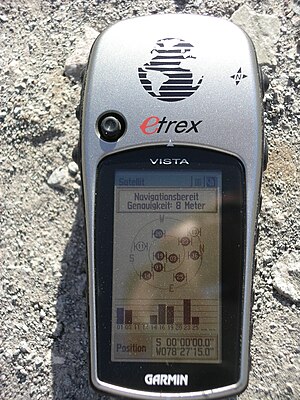 -- Zeb 13:59, 2 Apr 2006 (UTC): The old top of the range model before the colour (C) and colour expandable (Cx) models were introduced. Difference with the lower models is that it has a barometric altimeter. Uses a serial connection to transfer data - newer models use USB. When it detects low batteries it automatically shuts down, which can be rather irritating, especially in cold weather when it is best to remove batteries and place under armpits until warm. Need to pack the battery case to stop batteries vibrating out of contact whilst cycling.

-- Lorp 10:10, 28 Jun 2006 (UTC): I bought one in Sept 2003, and was pleased with it for a while. It feels sturdy and I was confident using it in the rain. (I shelled out for this model since I really wanted an integrated compass.) Although I used it in all weathers, I gave it only very light use overall until this year. Tracklog memory is adequate for a good day's hiking or cycling. It suffers from a common complaint in its tracklogs, in that it continues to record points even when accuracy drops off or signal disappears entirely - thus at a T-junction, tracks can head straight on into buildings, then veer back to the direction travelled afterwards. (I wish the accuracy was recorded with each tracklog point!!!) In mid-2006 I gave it more intensive use, hanging from my neck on a bike in the rain. And it performed very poorly. The batteries would keep losing contact, causing me to have to stop and wait for reboot and signal if I wanted to record tracks. Packing the battery case helped somewhat. Towards the end of that trip, the screen started to behave erratically. A few sharp jabs would sometimes cure it, sometimes not. Again very annoying and dangerous to have to do on a bike. Finally, signal strength was affected by being underneath my body; when I realized this I tried to balance it on my shoulder or throw it over my back (which was less clever since then I couldn't tell if it had shut off with the aforementioned battery contact problem). Just bought a RoyalTek RBT 2010 Bluetooth SiRFstar III, about which I'll report later.

-- DrMark 20:30 4 June 2007: Vista Cx: I bought this following the final end of my old Vista, it is a vastly better unit for not that much more money. It takes a micro-SD card so you can have a variety of maps, or a single huge one. I use a (£20) 1Gb card & the original 64Mb. It has a USB interface, & is waterproof, it's been robust so far (>6 months), including use with a bike mount. The above points regarding tracklogs are unchanged, but I find it works better in a pocket than the old Vista. It does work with osmgarminmap. The inbuilt Garmin world map is poor. The altimeter needs at least daily calibrating if you want to use it seriously. The compass is good but more sensitive to local variations than a traditional magnet one, it often disagrees with the calculated direction.