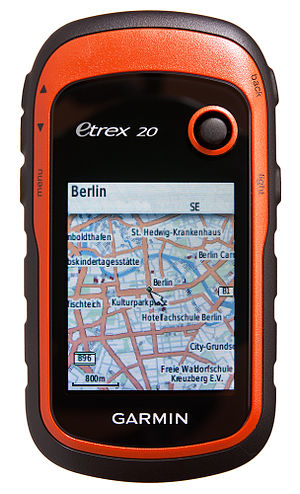 Garmin is probably the biggest manufacturer of GPS devices around. Many of the more expensive units can also take additional maps - leading to the possibility of having OSM Map On Garmin.

This page presents the variety of Garmin devices as part of the OSM wiki GPS device reviews. The list is very long, and so every series (Colorado, Oregon, eTrex, etc.) has now its own page, where general features of this series are explained. Additionally you can find a short description and additional links to the individual models in the following table. See Category:Garmin for more Garmin-related pages.

There are many ready to use Garmin Maps based on OSM data. You can download these files and put them straight onto your device or use them with Garmin Mapsource, Garmin Basecamp or Qlandkarte GT.

Many Garmin devices can connect to your computer as USB mass storage devices. You can then copy data, such as GPS tracelogs, to or from the computer. The tracelogs are often in .fit or .tcx formats and need to be converted to GPX. Note that some newer models use the very similar MTP mode rather than mass storage mode, and that the Wiki seems to make no differentiation between the two.

Many sport-oriented Garmin devices, (such as the Forerunner series and Vivosmart series) can connect to the outside world via Garmin Connect. Garmin Connect is Garmin's online sport activity tracking service. If you upload an "activity" to Garmin connect, you can then visit connect.garmin.com and export your activity as GPX.

Bluetooth-supporting models can connect to an Android or an iPhone, allowing you to sync and upload your activities to Garmin Connect. You cannot export GPX tracks directly that way, and you'll have to download your GPX tracks from Garmin Connect as described above.

If you don't want to use a smartphone, Garmin Express is a Windows or Mac program that allows your device to sync and upload "activities" to Garmin Connect. You cannot export GPX tracks directly that way, and you'll have to download your GPX tracks from Garmin Connect as described above.

When connecting to Garmin Connect (via Bluetooth or USB), some devices perform synchronization, which may include uploading data to Garmin Connect, downloading firmware and software updates, and downloading up to date satellite position data, allowing the GPS to lock significantly faster.

The eTrex, eTrex Venture, eTrex Legend, eTrex Summit and eTrex Vista make up this range. Colour models have a "C" after their name, and those with an "x" can take expansion memory models - good for OSM maps and long journeys. Some of the older black & white models are capable of displaying maps, although memory is limited to 1 MB on the Venture, 8 MB on the Legend and 24 MB on the vista. Some of the higher end models have magnetic compass and altimeter, e.g., Vista, Vista C and Vista Cx and the Summits.

Since the summer of 2007, there's a new range of "high sensitivity" receivers, coded with "H".

.Typ File Support gives you the possibility to change the look of maps yourself. Newer units with color display from Garmin mostly support it. This allows for maps showing much more detail.

For detailed information about devices in this series, see the Garmin/Nüvi series subpage. All of them are able to display OSM maps, but there are differences some limitations with tracking, POIs, and some other topics on particular models.

The Garmin Zūmo series consists of devices used for car or motorbike navigation.