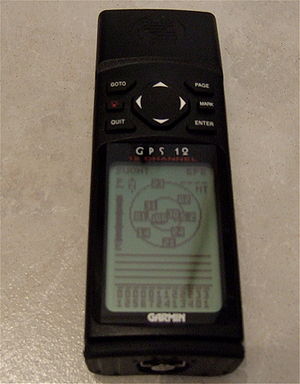 Introduced in the mid-1990s with a IPX7 standard waterproof housing that can be used either in upright portrait mode or in landscape mode. These units are still plentiful in the used market. Accessories (interface cable, mounts, etc) are still readily available. The aerial is detachable, it can be removed and remote-mounted, or another remote GPS antenna can be connected. Power supply is either external with a wide range from 10 to 32V, or by four AA internal. NMEA output. Requires serial port connection as it has neither USB nor any memory card slot.

The original GPS II was upgraded to GPS III in 1997, and then to the GPS V which was discontinued in 2003. Garmin still provided a firmware update in 2008, though. 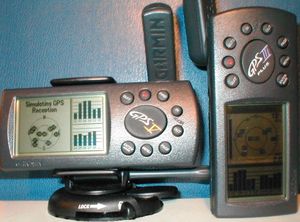 The first version [2] (II without Plus) still had an 8-channel receiver and possibly other limitations.

Display resolution improved to 160 x 100 with 4 gray levels. Configurable 1900 point tracklog (by time, distance travelled, or "resolution" - new points are only created when you deviate from your course). Visual alarms (time, off course, arrival)

Display resolution improved to 256 x 160, tracklog expanded to 3000 points, WAAS/EGNOS [6] capability. The V can load 19MB of map tiles, but this can take about 45 minutes via serial port. 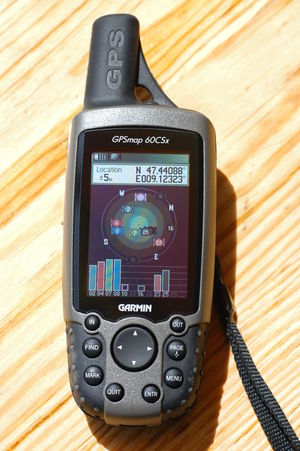 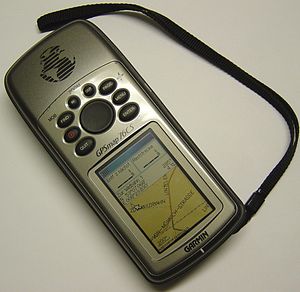 Totally impressive GPS unit in every regard. SiRFstar III chipset makes signal lock indoors possible. Ability to load OSM data as a map (OSM Map On Garmin - works for other Garmin units as well). The GPSMAP 60 and 76 are sister series with identical firmware, but different outside layout. The 76 series is profiled more towards marine use, it should also float if dropped in water. The S(ensor)-models contain a fluxgate compass and barometer. The 60 series are well suited for outdoor sport (paragliding, bike, hiking, etc)

Connectivity can be provided by GPSBabel or other such tools if you don't want to use the Windows software. Tracks can automatically be saved on the microSD card using very little space. When saving a track on the microSD, you'll keep all the timestamps and height information! You can also put the unit into a "USB Mass Storage Mode" where it just behaves like an SD card reader (however a card reader will be about 100 times faster). In this mode, the GPX files just show up in an external drive, and you can upload directly to OSM.

Suggested things to change before mapping (you will notice the Garmin Illnes: Totally nested menus):

I tried cloning a Git repository to me 60CSx's microSD card with it plugged in and mounted. I then turned off the unit and tried booting it again. At that point the unit couldn't get past the blue boot screen, it didn't get to the part where it displays the copyright info for the maps I have loaded which suggests it didn't get as far as loading the gmapsupp.img file.

There was no way to boot the unit to mount the microSD card and remove the files which were causing it to stop booting using the device itself. I had to use an external microSD card reader to remove the offending directory at which point the device worked fine.

I've packed up the offending Git repository at http://u.nix.is/gps.tar.gz which will be hosted at that URL for a few months (the git.nix.is host is permanent). But this will probably work with any Git repository. I suspect that on bootup the device recursively scans its SD card looking for maps. And something about the Git directory structure trips it up.

The problem is not restricted to git repositories, it probably has something to do with the depth of the directory structure and/or number of files.

Bugs waiting to get fixed

These are updated versions of the 60 and 76 series, released in 2010. All models seem to be based on the STMicroelectronics Cartesio chipset, with a quad helix antenna in the 62 and a patch in the 78. The 62 is designed for outdoor use while the floating 78 is suitable for marine use. Six models are available: the 62s and 78s add a 3-axis electronic compass and barometric altimeter to the basic features, and the 62st and 78sc respectively include preloaded US topographic maps and coastal charts.

German translation has some flaws. The quality of translation into other languages I don't know. ATM most entries of the geocache-menu and some other entries are not translated in the files provided by Garmin.
A revised and enhanced (and so far complete™) version of the german language file can be found here. Just copy it to device/Garmin/Text. After restarting the device you will have two entries for "German" in the language settings - the original "German" and the revised one "German (malenki)".
Seafarers, aviators and geocachers are welcome to have a look at specific items since I guess there are still some issues which I can't pinpoint.

As of Garmin version 3.20, the Italian translation has some flaws too. The main issues with the Garmin translation are: missing or wrong translations, wrong casing, bad formatting, bad wording, duplicated entries.
A revised version of the Italian language file is available here along with the installation procedure.

To enter a hidden menu go to Tripcomputer and press ↑→↓←.
With the button Page you can switch several pages containing system informations.
Pressing ↑→↓← a second time you enter a menu for debug logging.
To enable logging to GPX, go to Start Recording -> Select Log Types -> GPX- Disabled and set it to Enabled
Then press Quit, Menu and Enter to start logging.
The logs differ very slightly from the "normal" ones (so far for the logs compared). For each log a separate file is created with following naming scheme: yyyymmdd_hhmmss.gpx. The logs are stored in GARMIN/Garmin/Logs/gpx/.
The binary logs are helpful for Garmin staff to debug stuff. (I don't know how to read them and therefore not what they contain).

(2.95beta) This GPX log is saved in 1s intervals, and when I tried it, the timestamps were one hour earlier than the local time (CEST) that was used in the standard log. I expected to find there some raw data with more jitter than the standard log, so I was quite surprised to find the opposite. Compared to the standard log with 1s intervals, this log was less jittery, in a good way. It still contained very precise changes of direction, but without all the little zig-zags and jitters that I didn't do on my walk. However, to put things in perspective, the distance of my walk in the standard log was 2.11km, while in the hidden log it was 2.04km (70m or 3% less). And among the 1600 measurements the offset between the two logs remained rather small, mostly 5-25cm, often less, and only once the offset was about 75cm. But for those of you who are recording in 1s intervals, this might be an interesting option to consider. --Shernott 3 June 2011

Updated version of the GPSMAP 62 series: 64, 64s and 64st. The 's' likely stands for 'sensors'; 64s and 64st have a barometric altimeter, a 3-axis compass, and bluetooth which the 64 misses. The 't' probably stands for 'topographic'; the only difference between 64s and 64st is the preloaded topographic map (US or Canada only) and increased storage (8GB rather than 4GB).

It is not advisable to put custom maps on the internal storage. Corrupt files (or whatever else the firmware cannot parse) may crash the device during bootup and effectively brick it. Garmin support denies any responsibility for such problems (even though it is a firmware bug of course).

An updated version of the GPSMAP 64 series: includes 66s and 66st, where 's' and 'st' have the same meanings as before. Both devices have 16GB of internal storage. The major differences to the 64 series seem to be Galileo support, wifi, and the option of direct map+weather updates over wifi.