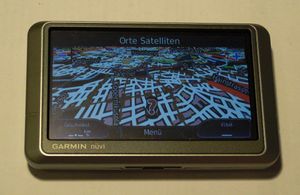 nüvi® is a registered trademark of Garmin Ltd. and is normally rendered in all-lowercase letters. It only is captialised on this page where all-lowercase would break wikilinks or hyperlinks.

To convert the log files to GPX you'll need the small program that goes by the name wnutrak. 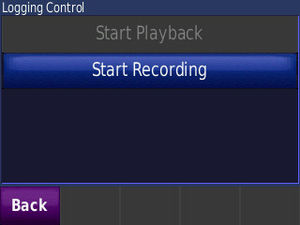 On 3 April 2009 dcnuvi and emmex, two users of the GpsPassion forum, discovered a new way to get to the (already known) hidden GPX track logging menu for some of the nüvi models.

Go to the Where Am I screen (by tapping on the vehicle symbol in map view mode or selecting "Where Am I" in tools menu). Then tap on the words "Nearest", "Address" and "Junction" in the following order:

This hack has been confirmed in the following model: 205.

Log file is located in the "\.System\Logs\gpx" folder with the file name YYYYMMDD_XXXXXX.gpx (track log is already in GPX format).

Note: the "\.System folder is a hidden folder on the device (will not show up on the root drive in mass storage) and so it is not on the memory card. You will have to type it in manually into the address bar (example "E:\.system\").

See Nutrak, which is GPL, has a Windows exe, Linux users must compile from source

Information from Garmin about the maximum SD card size of the automotive units. Requirement is that the device has the latest version of software. Information is dated 2011-09-26.

Can store 10 000 points in internal memory, writes them out in files afterwards. Up to 20 files may be created.

Can use map files from an SD-card or internal memory.

To override map in the built-in memory, replace .System/gmapprom.img . This is the only way it worked for at least one user.

Similar to maps, a .gpx file containing waypoints can be copied to either the Nuvi internal memory or an SD card. In either case the file can be a name of your choice with a .gpx suffix, and placed in the Garmin directory. Be aware that the Nuvi will incorporate these waypoints into its internal list so if you later delete the custom .gpx file the waypoints will still be there and you'll need to clean them out some other way. Restoring a backup of the "Current.gpx" file (from before the waypoints were uploaded) does not eliminate them, which suggests the Nuvi has additional memory that is not exposed through the USB interface. The user interface does not provide a way to delete them other than a tedious one-at-a-time process.

Although you can upload the individual waypoints comprising your route, the nüvi 50 does not seem to recognize the concept of a route other than the routes it calculates on its own. An uploaded .gpx file containing route data seems to be ignored, and the user interface does not have an obvious way to select a preprogrammed route anyway.

Track logging only available in software version 3.40 as a hidden feature and was removed in later versions. Recording interval is always one second. Battery life supposedly 3-5 hours, tested to be at least 3 hours.

Track logging available in software versions 2.50 and 2.70. Recording interval is one second. If connected to a Windows, Linux or OS X computer, the nüvi 205 is shown as an USB mass storage device, the GPX file is located in folder Garmin\GPX\.

The "Nearest" -> "Nearest" -> "Address" -> "Junction" hack from nüvi 200 has been verified on nüvi 760. A new screen appears, containing "Start Playback" and "Start Recording" appears, together with an unidentified button showing a camera logo...

This procedure doesn't work on Nuvi 760 with firmware 4.9. It worked before the upgrade. 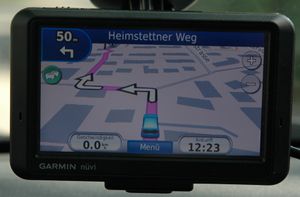 The nüvi 855 belongs to the 805 series, according to the owner's manual. Bluetooth (for hand-free phone calls) is not available on the nüvi 855, but apparently on the other models of this series.

Works fine with OSM maps and also with the free routable maps from perut (http://www.perut.org/). The nüvi has a world base map.

More info may be at https://help.openstreetmap.org/questions/30271/openstreetmap-for-nuvi-nuvi-1370t

Garmin nüvi 1390 T pro tested. OSM Maps for Garmin (All in one Garmin Map) works fine. Routing works fine (with some few strange shortcuts). Street name reading works fine. Normal logging works per default and is written in /GPX/Current.gpx. Diagnostic mode with logging can be reached via pressing the speedometer (see above) some five to ten seconds. The 1390 T has a slot for a micro-SD card, an 8 GB card works. The card must be formatted with FAT32, so file sizes above 4 GB are not possible.

Garmin nüvi 1440 tested with software V4.40. OSM Maps for Garmin works fine. Routing works fine, but it's not possible to enter addresses, so need to select from screen, or existing POIs. Normal logging works per default and is written in \GPX\Current.gpx and \GPX\Archive. nüvi 1490T Track Log Hack above does work

Has a slot for micro-SD, at least 8GB works.

Garmin nüvi 1450 tested with software V6.10. Just plugged in SD-Cards (2GB and 4GB) from my other Garmin devices (60CSX/Legend HCx) in the available slot and it shows the map and does routing.

Not possible to enter addresses. works for me sporadically, depends on the map, incompatibilities?

Track logging available. The recording interval is one second.

If connected to a Windows, Linux or OS X computer, the nüvi 1490T is shown as an USB mass storage device, the GPX file is located in folder \GPX\current.gpx.

Map is not visible when put into the /Garmin directory of the device. When put into a /Map directory (create if not present) in the root directory, the map is visible. You have to go to Settings/Map&Vehicle/myMaps to enable the map.

If there insufficient space on the internal memory to add your map, you can replace the existing .System/gmaprom.img (tested on a nüvi 2589). Note that .System/ is a hidden folder; in order to access it, you might need to configure your file manager to show hidden files or to type the path directly.

OSM Maps for Garmin create with mkgmap are working even with routing if stored as Garmin/gmapsupp.img on external SD card.

In mass storage mode the device has the usual ./GPX and ./POI folders were you can put waypoints and POIs, which will appear in the unit afterwards. Copying tracks and routes to the ./GPX folder seems to have no effect. Normal logging works per default and is written in ./GPX/Current.gpx. Diagnostic mode with logging can be reached via pressing the speedometer (see above) some five to ten seconds. The 2460 LTM has a slot for a micro-SD card.