This is a completed import of municipal building and address data for the City of Redlands, California.

Import Redlands building footprints data set to complete the coverage of building footprints with addresses for the City, using authoritative data from the City that was digitized from aerial imagery. OSM currently has limited coverage for the 34,000+ buildings in the City. This import will greatly expand and enhance the coverage of buildings for the city, while retaining the buildings already added to OSM. This also includes 12,000+ address points where there is typically more than one address per building, such as apartments. In a future phase, we will plan to update existing buildings to include additional address tags where needed.

Data preparation and import work was performed in January 2020, with the buildings import performed incrementally over a period of 2 weeks in late January and early February. The address point import was performed over a week period in early April. 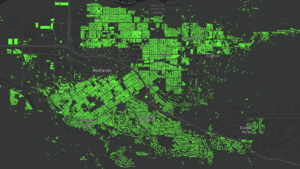 This map shows new buildings that were added for the City of Redlands, CA area. 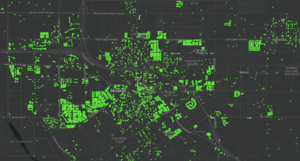 This map shows new address points that were added for the City of Redlands, CA area.

Latest Building Footprints and Address Points to be downloaded and processed.

OSM ODbL Compliance: Yes, explicit permission to integrate with OSM given by GIS Administrator for the City. The data is provided under a Public Domain license.

Calc: some attributes will need to be calculated based on existing attributes in the data source.

Existing building features in OSM will not be replaced. The plan is to perform the import and conflation in phases. In the first phase, only new buildings that do not intersect existing buildings or other OSM data (e.g. water, roads) will be added. In future phases, existing buildings may be downloaded and updated to include additional address tags.

This import was done in sections (block groups) using ArcGIS Editor for OSM. Import was tested on Development server first.

New dedicated import account(s) to be created for import. These include:

Will set source = City of Redlands.