From OpenStreetMap Wiki
< India
Jump to navigation Jump to search 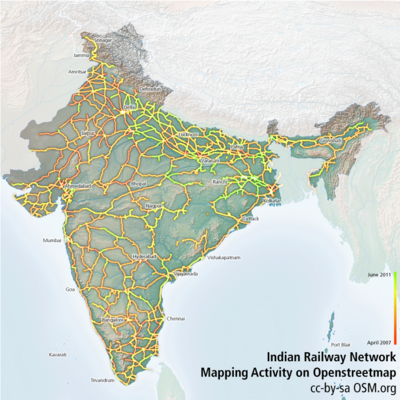 Coverage of the IR network on OSM

To build a comprehensive free dataset of the Indian Railways that will include the following information: 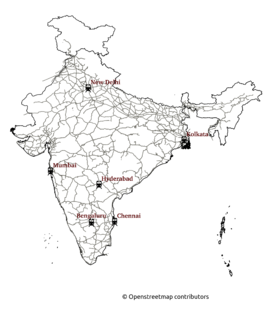 Railway Coverage as on February 2015

Mapping of the railway network was initially limited to the major Indian cities which had highres yahoo imagery. in these major cities, the coverage is excellent with close to complete mapping coverage of the suburban railway systems (Mumbai, Delhi, Chennai Kolkata) railway yards and even spur lines. Later even the metro system in Delhi was mapped completely and now even the alignments of metro lines under construction in Mumbai, Bangalore, Chennai and Delhi are available.

For the rest of the network, a large section of the Southern Railways in Tamil Nadu and Kerala were mapped with the help of GPS data, mostly donated by members of the Indian Railway Fan Club Association (IRFCA). The Konkan railway stretch on the west coast was mapped comprehensively using GPS and even includes most bridges and tunnels. Apart from this, GPS data was available for only a few isolated sections and the overall coverage was quite poor.

An partial import of the public domain Vmap0 data was done in Maharastra, this data was found to be outdated and had a poor accuracy being upto 5 kms off in places. It is possible to import the rest of the data, but it looks to be a better option to map the network using Landsat aerial imagery.

Beginning early 2010, tracing of the railway network was started by using Landsat imagery as the source. Using this, large parts of the network in the northwest and southern India were mapped almost completely. The featureless terrain permitted easy identification of the railroad lines even in low resolution imagery. 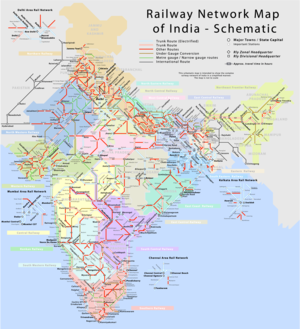 Railway lines can either be mapped with precision using GPS traces or using high resolution Yahoo satellite imagery where available. See India#Mapping_progress. In the rest of the places, Landsat bands V and 9 can be used in conjunction with WMSPlugin#Adding_a_WMS_Server in JOSM. The majority of the existing network coverage in osm is through landsat imagery. Due to its geomentry of smooth curves, railway lines, including spur lines and railway stations can be easily distinguished using this low resolution imagery.