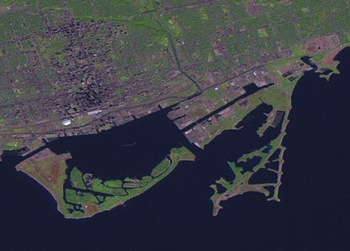 Landsat is low resolution satellite imagery, produced by NASA. The imagery is worldwide and released to the public domain, so can be used as a source for OpenStreetMap.

Compared to other imagery (e.g. Bing), Landsat is lower resolution, but it can still be useful for tracing large features, eg forests, lakes or coastlines.

Landsat images can be viewed in JOSM using the WMS/TMS imagery feature. As default, this came configured with this URL for Landsat, provided by the former Jet Propulsion Laboratory (JPL):
http://onearth.jpl.nasa.gov/wms.cgi?request=GetMap&layers=global_mosaic&styles=&format=image/jpeg&
As of June 2011, this URL stopped working, and gives now an error "This server no longer provides full WMS services!", and just show red "Error" tiles in JOSM. A Landsat mirror is available from GIS-LAB.info, this is listed in the JOSM WMS/TMS preferences as "Landsat (mirror)". It uses the URL:
http://irs.gis-lab.info/?layers=landsat&

As of February 2018, this URL stopped working too.

If this displays red 'exception occurred' images, it normally means the WMS server is down or rate limited at the current time. Try again later. In the past there have been significant periods of non-availability, which prompted people to look for "tiled WMS" workarounds. That's no longer needed.

The former JPL's OneEarthData is now part of the newer Global Imagery Browse Services (GIBS) available at:
https://earthdata.nasa.gov/about/science-system-description/eosdis-components/global-imagery-browse-services-gibs
as part of several available formats (including with higher resolution, and on multiple bands of observations), rendered with several map projections, and accessible with several standards-based web services.

NASA supports an open data policy, and asks that users who make use of GIBS in their clients or when referencing it in written or oral presentations to add the following acknowledgment:

We acknowledge the use of imagery provided by services from the Global Imagery Browse Services (GIBS), operated by the NASA/GSFC/Earth Science Data and Information System (ESDIS, https://earthdata.nasa.gov) with funding provided by NASA/HQ.

Landsat via Bing and Yahoo!

In fact Landsat imagery (or a colour-tweaked version of it) is often used as base-level detail by imagery providers in regions where no better imagery is available. Bing and Yahoo! Aerial Imagery both do this. In Potlatch from zoom level 13 and below, the Yahoo! imagery is actually showing Landsat (zoom out until you no longer see grey tiles)

In JOSM you can also see Landsat via Yahoo! (instead of the direct Landsat WMS described above). If you managed to get the Yahoo downloader set up, simply request Yahoo! from the WMS menu while very zoomed out. Zoom out so the scale says ~2000 for example. If you get grey tiles, drop the layer, zoom out, and request it again.

The Lakewalker plugin can automatically trace lakes and islands from Landsat images.

Global Mosaic is an imagery mosaic of the earth created with over 8200 Landsat7 scenes collected from 1999-2003. The imagery has a maximum resolution of 15m per pixel and is available in a 11 styles including 2 in color (visual & pseudo) and 9 spectral (Blue Green Red IR1 IR2 IR3 ThL ThH & Pan). The Global Mosaic tiles are served via WMS and can be downloaded in JOSM by JOSM/Plugins/WMSPlugin#Adding_a_WMS_Server using one of the following urls:

Learn about these bands at the Landsat Education site