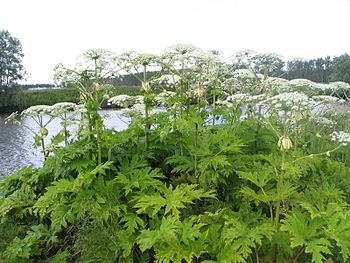 Invasive non-native species or invasive alien species (IAS) are animals and plants that are intentionally or not introduced into a natural environment where they are not normally found, with serious negative consequences for their new environment.[1]

This guide explains how to map plants that adversely affect the habitats and bioregions they invade economically, environmentally, and/or ecologically. See the Wikipedia entry on invasive non-native species for more information.

There is a need to control and manage the negative affects of invasive non-native species. It is hoped that OpenStreetMap offers an easy-to-use method for volunteers to map the location of non-native species and allow fast dissemination of this information. Further development of a custom rendered map and/or the use of more advanced GIS tools will lower the barrier for accessing and utilising geo-spatial tools for the effective management of invasive species over a large area.

For 'common' names in a particular language use a colon followed by a two letter suffix for example in English:

Apply to a node, way or area. Examples:

If tagging an area, way or node there may be reasons to record the cover=* value of different species within an area. Presented here is a method for recording plant cover within a given area e.g. a wood or marsh.

Percentage cover is usually recorded by using a quadrat or measuring out a specific area and then estimating by eye the coverage of different species within that area. Note: Remember that percentage cover can add up to over 100% because there are multiple layers/canopies within a habitat.

DAFOR standing for dominant, abundant, frequent, occasional, rare is a quick way of measuring coverage or frequency of a plant taxon=* within a given area. The dafor=* tag may require measuring an area or use of a quadrat but is generally a rough estimation of plant coverage. For instance dafor:Ganzia rigens=* dominant or dafor:Fagus sylvatica=* occasional.

The number of individual plants associated with a point, line or area may need to be recorded. This information maybe used for quantifying the amount of resource needed to manage this species in terms of pesticide application or cutting time.

Examples of invasive species (to the UK)

There are thousands of invasive species, please see links for further information. It would be appropriate to use OpenStreetMap to record the most prevalent and damaging plant species. Here follows a few examples of the plants in question for the UK. Please add further sections for other countries or regions.