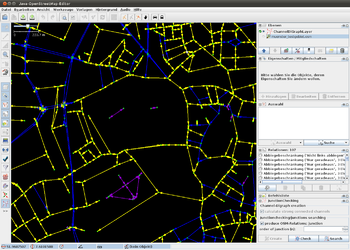 Junctionchecking is a plugin for JOSM based upon the RoadNetworkAlgorithms which identifies junctions as sets of channels in terms of their locomotion affordance: e.g. a 3-way junction affords people to move from every one of 3 junction entries to every one of its 3 exits (n times n). An example is a T intersection. So a junction is a road network feature that allows for a certain kind of constrained navigational choice. Classical 4-way junctions are e.g. cloverleaf interchanges. Note that from an affordance perspective, the junctions found may not always perfectly correspond to what you would intuitively consider the junction, since it may contain smaller parts that already satisfy the affordance criterion. Therefore our definition is based additionally on a minimality criterion. There are also road configurations that look similar but do not allow for n times n ways. Note that the algorithm is roughly quadratic in the number of channels you search in, so to search in large amounts of data is not recommendable. Note also that the correctness of the algorithm is dependent on the availability and correctness of turn-off-restrictions specified in the OSM "restriction relation". In case these are missing, the algorithm makes the (often false) assumption that all turn-offs are allowed. The plugin and the channel digraph theory is developed at the SeresII working group at the institute for geoinformatics at the university of Münster.

Even though there are informal standards for road network labeling available (e.g.the GDF standard, ISO 14.825:2004), geometries and category labels in different commercial road network data are far from denoting equivalent things. Furthermore, the available categories often lack high-level features, such as junctions and roads, as well as labels for applications that go beyond navigation systems. In RoadNetworkAlgorithms, we have proposed a theory of channel networks which is grounded in observable locomotion affordances. Into this theory, road network data, data schemata and related ontologies map in an obvious way. We have given affordance-based definitions of a channel network and an n-way junction, and showed that the junction definition is satisfied by a collection of most common junction types, for example 4-way-intersections, diamond interchanges, jughandles and cloverleafs. Using this theory to semantically annotate, check and translate data about road networks requires to have tractable algorithms available. These algorithms were implemented in the junctionchecking plugin.

An n-way junction is an induced subgraph F of a channel digraph D, which

After installation there is a button on the left side of josm. Click this button to activate the plugin dialog which is shown on the right side of josm.

Junction check in a subset of channels

The user can mark channels in the created channel digraph layer for junction tests. The user need to set to set the junction order in the plugin dialog window (default value is 3 for a 3 ways junction). To start the junction check the user must press the "Check" button. There are 3 possible results:

Junction search in a subset of channels

It is possible to produce osm relations from discovered junctions. These relations were saved in the original osm data layer, the user can activate/deactivate the creation in the plugin dialog ("produce OSM relation: junction"). A junction relation consists of the member of the junction and the junction order.

Example of a junction check 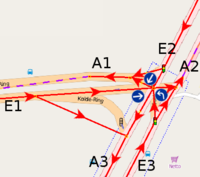 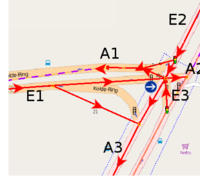 This figures shows the result of the check: there is one smaller junction candidate. It could be a junction but only 3 from 4 criteria were tested. total reachability, discreteness of navigational action und minimality II. The subset in the figure can contain also a smaller junction. To test this it is necessary to check the subset. 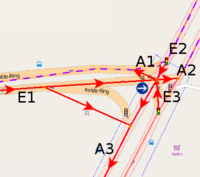 The result of the second check is also a smaller junction candidate. This subset must also be tested for minimality I. But in this case there is no smaller junction discovered and that means the marked subset in the figure is a junction.