The Amazon Kindle is a type of mobile device. Its primarily and e-book reader, but there are some ways to get OpenStreetMap onto the Kindle.

Ebookmaps.com provides free maps in both .mobi (for Kindle) and .epub formats - http://www.ebookmaps.com/en/index.php - these appear to be built from OSM data (they have the OSM attribution).

The Kindle can also show normal websites including our maps: http://openstreetmap.org: 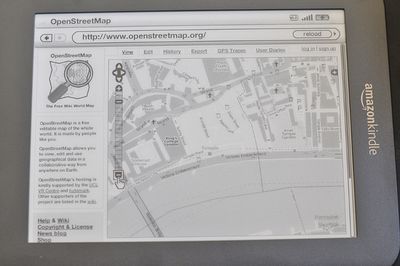 The Kindle Fire and Kindle Fire HD are tablets running Android. However it is a customised version of Android, which does not include Google Play as standard. Instead it has the Amazon Appstore, which does include some apps for OpenStreetMap maps such as the MapsWithMe offline map viewer. Other apps such as Vespucci can be installed by side-loading an APK file, or via the f-droid repository.

The Kindle Fire HD 4G LTE is the only model with GPS built in.