From OpenStreetMap Wiki
< Linuxtag
Jump to navigation Jump to search

The OSGeo foundation is planning to have a booth at LinuxTag 2007 and OSM is invited to join them there. LinuxTag is the largest European Open Source expo. It takes place in Berlin, Germany this year between Wednesday, Mai 30th and Saturday, June 2nd (four days).

Here is the Wiki page of the OSGeo for planning the booth: [1]

Details will be worked out over the next weeks. Please edit this wiki page with any support you can give. Contact Ralf Zimmermann if you have any questions. 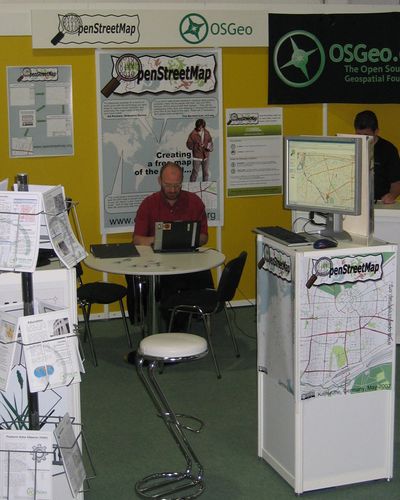 OSM at the OSGeo booth at LinuxTag 2007

Yesterday, we did set up the booth. Today was the first visitors day. Overall, it was a big success. We had lots of interest from visitors. We even got visited by German TV, they say they will broadcast a short episode about OSM on Sunday, 03-Jun at 16:30 on 3sat (German TV). They had a part about LinuxTag, but nothing about OSM in it. Most of the time they showed new Linux Distibutions.

A quick server statistics of the mapnik tile stats shows that 1.1M tiles were served this day, which is higher than ever recorded so far (preceding week had the daily average of 860k tiles served per day).

07-May Deadline to supply information about OSM to LinuxTag organisation:

21-May Deadline for poster design (done, received the printed posters)

29-May Setup booth
We will probably start to put up the OSM part of the booth around 17:00:

We need people to man the booth for four days. Please put your name down here. 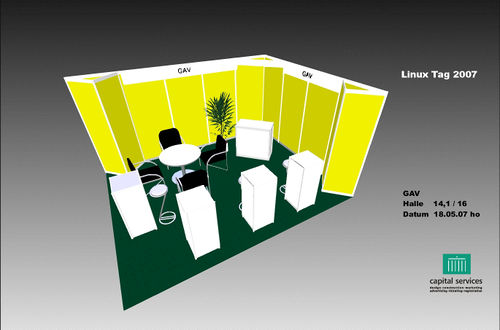 Booth for the four projects - OSM being one of them

We are sharing the booth with three other projects.

We will have one podest (50x50x130cm, width x depth x height) which is open to one side. We can put the computer into this podest and put the TFT on top of it.

A preview of the poster designs can be found here: [2]

Anything else needed to represent OSM? Ideas are welcome.

One idea would be to do some mapping during the LinuxTag in order to improve the OSM coverage of Berlin. These mapping activities would be a good way of showing how to edit OSM data with JOSM.