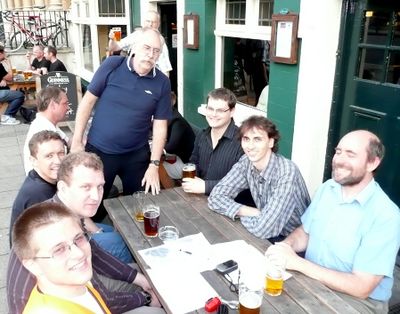 Everyone meeting at the pub after mapping Stratford

This is a past event, the 5th Mapping Party in the Summer 2008 London Mapping Marathon series. This mapping party was in East London

Where: Stratford (map) ...near the Olymic Construction site.

When we converged on the pub, there were more people than expected! The areas we managed to cover were strangley sporadic patches in the North, and the South, and less in the middle, as illustrated below

There is a lot of unnamed residential streets in this direction, and Stratford is well connected, so we're planning to revisit see London/Summer 2008 Mapping Party Marathon/2008-07-16

Harry Wood has sent some text and some funky images to be published in a little Stratford newspaper. They want to use the above photo, but need me to gather signatures on a release form. *sigh* starting to be too much effort. So if you people could email me with your email addresses, I'll email back a word document for you to sign and post to them.

Stratford is in zone 3. The north end of the DLR, and on the Jubilee and Central lines.

It's also accessible by overground train from Liverpool Street (the mainline), and Highbury & Islington.

We met at King Edward VII. [1] [2] 5 minutes walk from Stratford train/bus/tube interchange. Red 'X' marks the spot (approximately) on the map below.

The pub was nice. indoor and outdoor seating. posh food. 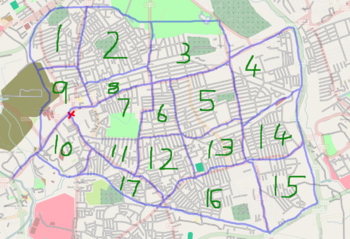 This wasn't exactly what happened!

1. Harry Wood - just down the west side

8. steve8 - on way out and back from Stratford station to 3

9. Harry Wood - just down the west side

Photo from the evening