From OpenStreetMap Wiki
< London
Jump to navigation Jump to search 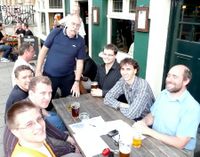 Meeting at a pub in Stratford 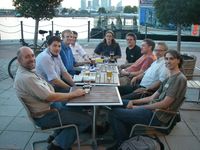 Beers by the docks at Canning Town

The London Mapping Party Marathon 2008 was a past event series. A series of weekly mini mapping parties to be help in the London area over summer 2008. They generally started at a station in the area that needs to be mapped, and ended at a pub in the local area. It's not just about naming the streets, but adding points of interest too. We decided to move to weekly mapping parties, alternating each week between the north and south of the river.