This is past event

Most of the sectors that were taken have been completed - an estimated 2/3 of the cake.

The party also featured in the Croydon Advertiser. (Although a little too centric around one person)

And the Croydon Guardian!

East Croydon is on the fast mainline from London to Brighton frequent services from Victoria and from further on the Thameslink line. the Tramlink runs from Wimbledon (mainline & district), and also interchanges with other rail lines in the east. There are probably buses too, check with TfL on those. Croydon stations are in Transport for London Zone 5. 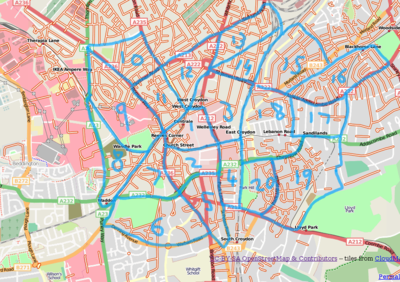 Cake diagram, edit this section to grab one!

Thomas Wood or email grand.edgemaster@gmail.com, Edgemaster on IRC, mobile 07964 964134 (will not be available after the event)