Ichi Sansho Joho Import 2019 is an import of Ichi Sansho Joho (also called ISJ) dataset which is of type node covering (broad location in Japan). The import is currently 2019 September at the planning stage.

ISJ dataset is very reliable and accurate dataset of Japanese place name. It contains administrative place name only. Not for natural place name.

The goal of this import is to improve coverage of Japanese place name using ISJ.

And by doing this import, it could improve normalization of place name data in Japan.

Total number of municipalities (data files) to be imported: 1909

Data source site: http://nlftp.mlit.go.jp/isj/index.html
Data license: http://nlftp.mlit.go.jp/isj/agreement.html
Type of license (if applicable): Original. It is similar to CC BY (attribution).
Link to permission (if required): OSMFJ got permission to use this dataset in OpenStreetMap (2012
OSM attribution (if required): http://wiki.openstreetmap.org/wiki/Contributors#ISJ
ODbL Compliance verified: yes

This is one time import.

No reduction or Simplification is planned.

Japanese place name structure has definition about quarter/neighbourhood as following.

According to this structure, `丁目` (category 3) lines should be divided into 2 column (quarter & neighbuorhood).

But we do not divide `丁目` into 2 stratum in this import action.

Original data is distributed in CSV format. Meta data is as following.

Samples are available at Github.

At this time, only user:nyampire will do import tasks.

Aside from the import tasks, user:okadatsuneo is working trace tasks.

And his working list and import procedure are described in this page.

user:nyampire and user:okadatsuneo is having continuous contacts on the Slack channel.

Surely, there are existing node of place=[quater, neighborhood or hamlet] in Japan. 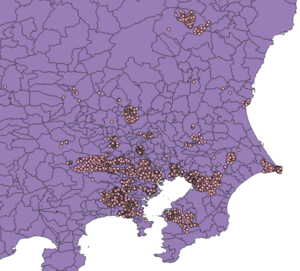 To clarify the scope of work, user:nyampire has created a list of municipalities that may have potentially duplicate data to import.

In the following list, the number of place=[quarter, neighborhood or hamlet] is included in the municipality's area is clearly indicated.

Detailed procedure is available at

user:nyampire will revert if any problems happen.

Planning to use OpenRefine to detect errors and duplicates.