This Overpass Turbo query shows if there is existing place node for target area.

// fetch area “Japan” to search in

If no data is returned, go to `Case: No existing data` clause.

If some data is returned, go to `Case: There is existing data` clause.

Pickup the target .osm file in Github repository, and load it into JOSM. 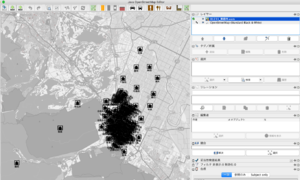 Upload it to osm.org using JOSM.

As the upload finished, mark as `finished` on the checklist on Github.

Case: There is existing data

Load the result of query from Overpass Turbo.

You can "Export" in Overpass Turbo, then "Load the data with JOSM". 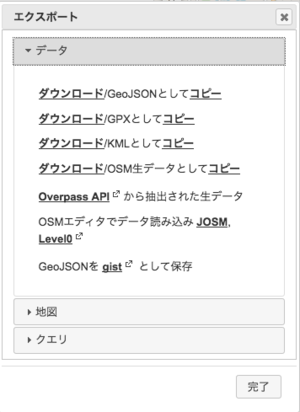 Target data will be loaded as a layer. Remember you should turn on the JOSM remote load settings. 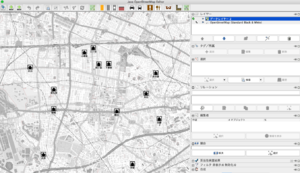 Load the target dataset with JOSM

Pickup the target .osm file in Github repository, and load it into JOSM.

So, you have 2 layers in JOSM. One is from Overpass Turbo, the other is .osm from import.

You can see Conflation Icon on the right pane of JOSM. 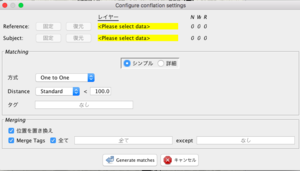 Meaning of "match", "Reference only" and "Subject only"

There are several columns on Conflation panel, each column means...

`Match`ed node could be validated for tags with "conflate".

In this case, existing node is a quarter node after "丁目" divided. 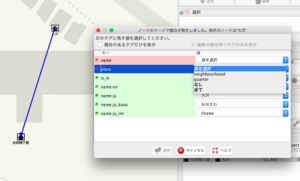 If it is available for conflation (in the case of both 2 nodes are neighbourhood level), you may conflate them in Subject layer. History of Node is Existing node's one.

In this case simple merge is not available, so you should copy that node from .osm file into Subject layer. You can use JOSM menu `Merge selected`.

Todo for Reference only

This case means only .osm file has such a node.

Use Right click to pan the target node. Check around if there is another node, then merge it with "conflate" button.

Todo for Subject only

This case means only Subject layer has such a node. This is just a reference information.

If the merge process is done, select Subject layer and upload them into osm.org.

The following is a list of possible cases and how to handle them.

If existing data has tags, those tags should be remain.

(name:ja_rm and name:ja-Latn normalization is not the scope of this import)

quarter and neighbourhood is didived already

As a result following data will be made.

Both quarter and neighbourhood nodes exists

Place tag should not be used on Boundary polygon.

Place name which is not in address structure.

In the case of commonly used place name such as `○○ Onsen` or place name for natural.

If those node has place = quarter, neighbourhood or hamlet, replace it with place=localty.