It has been proposed that this page or section be merged with Map Icons. (Discuss)

This is a project to research, create and improve pictograms for use in rendering on maps, mostly to represent points of interest.

The initial spur for this project was some informal chatting between a few people at the State Of The Map 2007, about the different symbols available for the Osmarender maps, largely inspired by some of the great talks on cartography.

An initial observation, when looking at pictograms (and points of interest) on maps, is that there seem to be two types of 'need'. Some pictograms representing points of interest are useful on general-purpose maps, as a way of helping to give you some information about the lay of the land and the geography of an area. For example, a graveyard marked on a map might be useful, even if you have no intention of visiting it, because it might be a useful landmark for wayfinding and tells you that the patch of ground its on isn't something else like a park or green which you are interested in visiting.

By contrast, there seems to be a second set of points of interest, and related pictograms, which are only usefully marked on a map if you are specifically looking for them. They might still make sense on a general map, but would be more useful on a specific-purpose map. An example might be a letterbox pictogram, which only really helps you if you're looking for the nearest place to post a letter, and might otherwise get in the way.

Of course, some pictograms fall between camps (and some arguably aren't all that useful at all), but this observation seems to hold as a general guideline.

Why is this distinction relevant? Well, because the former type of pictogram needs to be able to be placed on a map more sympathetically to the general base cartographic features, whereas the latter type perhaps need to stand out a bit more. Another reason is that for the purposes of this project, we might want to concentrate our efforts on the former type of pictogram rather than the latter.

Please respect copyrights - especially the set of sport icons designed by Otl Aicher is copyrighted and cannot be used here. 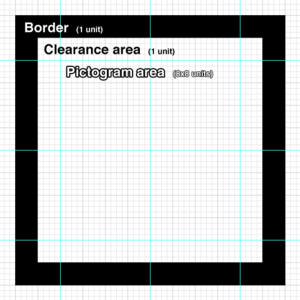 When designing pictograms, a good method is to make a quick sketch of the object first. Draw it small on a piece of paper, this will help you figure out what the most basic form of the object is. Using a church as an example, you would likely draw a triangle (the steeple) on top of a rectangle (the main hall). When you are ready to digitalize your pictogram, use the grid to keep your drawing neat, this will help it maintain the look of other OpenStreetMap pictograms.

It's proposed to use a standard grid (right) for this project. The main area is divided up into 10 units by 10 units. The outer 1 unit is designated a 'clearance' area, and you shouldn't normally venture into this area (however you can go slightly over the line if you need to). There's also an outer optional 1 unit border (which wouldn't normally appear on a map, but might appear on a sign or key).

Within the grid, each unit is sub-divided into 4 sub-units. For further granularity, you can sub-divide into 8 units instead (or even 16), but 4 is usually as far as you need to go.

A look at the 'church' icon (see place of worship map feature), to see how it might fit within the grid, and how it might be improved... 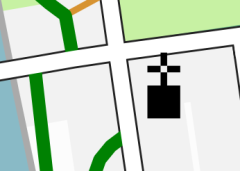 Putting this into the grid.

Better, but still not perfect. Let's try starting a new pictogram from scratch, one that more closely resembles the 'typical' church (judging from a Google image search anyway).

Not bad eh? Maybe the proportions aren't quite right yet, but it's a good start. Should the corners be rounded, I wonder? Hmm, maybe that's a bigger decision.