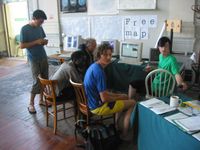 Map Limehouse is a past event which took place in East London way back in 2005. In fact it may just be the very first ever OpenStreetMap Mapping Party! An important moment in the early history of OpenStreetMap, although at the time it was not referred to as a "mapping party". The event was called "map limehouse".

Blurb: Limehouse Town Hall had an open day on the 16th and 17th July, which was a big bonanza of communidee activities, a bbq, a tombola, plus collaborative cartography of various sorts. During the day the 10 workstation linux lab and however much mobile equipment we were able to put together between us was put into service to map as much of the area as we possible.