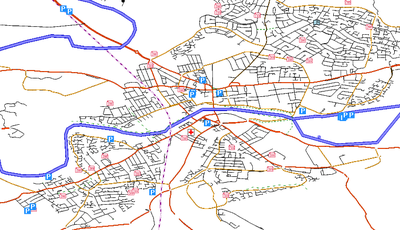 This page is about OJW's OpenStreetMap renderer. Mapyrus itself can be found here

Mapyrus is a vector drawing tool written in Java. It takes input from a script file, and generates output in a variety of bitmap and vector graphics formats.

In its simplest form, the input file is just LOGO commands (move to x,y while drawing a thick red line). However, the complexity of input files can be increased to the level of loops, variables, functions, etc.

Points, or sets of points, can be used for drawing symbols, labels, etc.

Polyline support in Mapyrus is extremely strong. In addition to the usual colour, width, style options, it is easy to create parallel lines (e.g. for sidewalks, or for shading beaches). It can flow text around a polyline. It can also create elements at intervals along a line, e.g. symbols, labels, or for creating (say) a line composed of small squares. 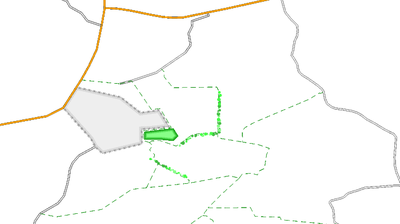 Areas can be created, filled, filled with a pattern, or can create lines inside or outside the edge of an area (e.g. like access land on OS maps), and the centre of an area can be found (e.g. to place labels)

Georeferenced images can be displayed

Icons can be loaded from image files and easily displayed. However it doesn't seem to support transparent icons.

Mapyrus can handle a number of geographic data file formats, such as Shapefiles and text files, and it can download data from a database with geographic extensions. OJW's renderer is not using those functions, and uses a Perl program to read OSM data, and supply it to Mapyrus as drawing commands. 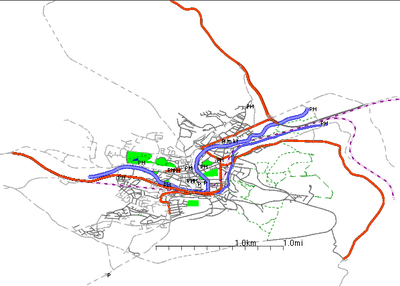 Bath. The lake within the park uses elevation tag to place itself on top of the grass area

The Mapyrus programming language has functions for marking an area as "protected", then testing whether a potential location for something would infringe on a protected area before deciding whether to draw it.

A java geographics math library can be used by Mapyrus, allowing it to calculate intersections, unions, etc. between various elements, such as "is this point within the woodland", "is this street within the built-up area" 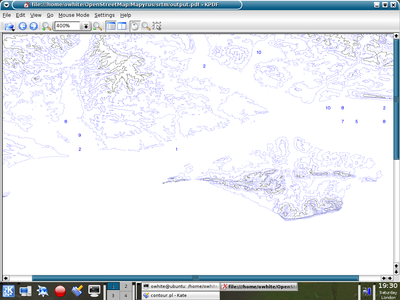