This page is representing the progress of Marshall County, WV that has been going since July/August 2020 made by Ottwiz. (Of course if you can map the rest what i've stated in Marshall County, West Virginia#To be done, then go for it)

I've been editing Hungary for a while since I live in Budapest, Hungary. I have a friend in Moundsville, WV, and after editing Hungary a lot (the link contains the page where it displays how much I contributed), I wanted to try out my mapping skills somewhere in USA, because I know USA has a little bit different road network than what is in Hungary. When I gotta know where my friend lives, I looked up the city on OSM, and I saw that the city is basically unmapped, it has no borders, no buildings mapped, just only the roads, but those were inaccurate too, because of the TIGER import that happened in the late 2000s. At first point I wanted to do only Moundsville, but I got to the point that "Hey, that's pretty inaccurate all over the place, let's fix this". I thought that i could finish this in 2-3 months. Ahha, but because I'm a Computer Science Engineering student in a university, my studies and exams made me busy, but you all know that university, work, family first then after the hobbies and other stuff.

I'm gonna put the screenshots I took here. Probably won't be finished for the first time, because i have to save some of the images I took and uploaded to #local-west-virginia in OSMUS Slack, and I have some that I put in the presentation that you can access on my github page that I provided in my profile. 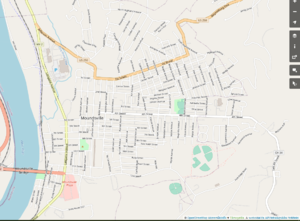 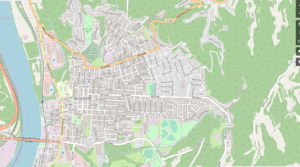 Moundsville is an interesting story, because even if it's a city, it's not very big, still having lots of streets. I also had to take some POIs, at a point I took it from a public domain database, that seemed to be public domain, but many mappers questioned their existence on OSM mailing list, because all of them that i got was collected by a crawler (https://www.alltheplaces.xyz/). I was a bit angry, but I had to accept the fact that the crawler is no good in OSM because I can't use the exact proper data without asking the owner of the website that "hey I wanna use the map data you provided on your website in OSM a non-profit map where you can contribute stuff for good" (of course it can be defined better just I gave an example here). Of course if I lived there, I'd take all the important stuff and then just grab the contact information from the web. At least I got lots of help from User:Minh Nguyen, who is from Ohio (and now lives in California) but knows lots of quirks and stuff in WV since Ohio is neighbored by WV. Thanks to him, I gotta told what tricks i can use while mapping roads (road numberings for example), and I got some of the POIs from Mapillary and OpenStreetCam, but the coverage isn't 100%, so please, if you happen to drive around/through Moundsville, I'd thank you very much to take pictures of the POIs in at least in the CBD part, where the shops, and government buildings are, and maybe where the WVDOT is at Dot Drive (if it's allowed to take pictures of course, because even Google Street View doesn't have coverage there, though I know I can't use it :)) And then upload it to either Mapillary or OpenStreetCam, if you can.

The buildings that I mapped were a bit tedious because there were tons of buildings in the city.

The rest of Marshall County

As you can see, I provided plenty of images how I did the county recently and the plan how I want to carry it out. I drew lots of forests and also aligned heck of dozens of roads, which were unaligned, now they're around 95-100% of accuracy, this really depends on the terrain. There are some GPS traces in the county but not so much to compare it with imageries, so at some points I take NAIP as a reference, which is accurate.

Because mapping these areas is tedious as hell, I usually listen to music via Spotify or via local radio.

Sometimes I get brainfart when I see that there's a lack of roads on the map, and that they're badly aligned because of the TIGER import. It's good that at least my home country, Hungary doesn't have these types of problems (or just not as much, because most of the roads are drawn there)

It's challenging really, because I also have to upgrade the highway tags on County Highways from residential to tertiary and give the proper ref from the TIGER Imports or TIGER Roads map overlay.

I worked out a plan that how should I map the county. I set up myself a "division point" that I do the part of the county first the part south to US-250 (and the part west to WV 88), and then after the rest comes. I go like in a zigzag shape, so now you can expect as of late 2020 that I go towards Cameron and near the WV-PA border. (You can see it in the Gallery)

In OSM, i like to detail all parks, like in Hungary, I detailed the Budapest Zoo or Berekfürdő Thermal Waterpark, so I put the forest areas where I saw it on the imagery. (See the Moundsville Country Club image)

Update 1/21/2021: I mapped the forests in Wetzel County too a bit, and in Greene County, PA, so they also got some care. I almost finished Marshall County, probably it'll be finished before February. This is a brave challenge to do, aligning all the roads and stuff. Not all buildings have been drawn, neither driveways because of their amount, but Moundsville and Cameron got their buildings at least on the map. It may happen that buildings get drawn at a point but that's definitely not gonna happen soon. But i'm doing this for fun, for making a better free wiki map for the people.

Update 1/23/2021: Mapping of forest areas are done. I also touched Ohio County, a little bit, due to the forests overlapping there,and I also started to add the residential areas. All the roads are realigned by me, but it MAY happen that because of other imagery it's "unaligned". No, it's aligned but to another imagery(Like I did Moundsville to Bing, not to Maxar).

So to tell you, what imageries and tricks I use, I usually use Maxar in most of the areas, because it has a recent imagery, but sometimes it has very old one, so i have to flick over to NAIP, because that's the most recent one. I also use Esri Clarity Beta, because that's the clearest imagery in the area, but it's old that i only use it, if the latest imageries contain the thing what I saw on Esri Clarity. Citing my reference from the West Virginia article: "dated means here ~5+ years of age, as near Moundsville, WV there existed a power plant in Ohio "R.E. Burger Power Plant" (OSM reference to it) which was demolished in 2015(see the Wikipedia article on it), but the imagery still has the towers." So you know what I mean. Esri is mostly good for aligning roads but not taking new roads that don't appear on newer imageries.

I used Bing in Moundsville, WV for buildings, but that's not the most accurate imagery for mapping forests because it's a leafless imagery, so I can't map the forests perfectly, and sometimes it's too blurry aka low-resolution at some points. Mapbox uses imagery from either Esri from higher resolution in Marshall County, but from December it uses Maxar imagery, as me and Minh noticed. USGS is basically NAIP just blurrier, so I use NAIP if I want to map recent stuff in a particular area where Maxar doesn't have the latest coverage (it's either not photographed OR it's not indexed yet in the database OR i don't know)

Also, please! Only touch the areas done by me, if I left out some driveways, but DO NOT delete them like one user did for what I was a bit angry, so I had to redraw them. (That user used only Esri Clarity (and i took the roads from Maxar which has a recent imagery) which I mentioned it's only good for tracking down the trail of tracks and roads but only when we compared with recent imagery) This really takes me hours and hours to draw them, if I count how many hours spent improving Marshall County, i'd say, I did ~258k changes as of 12/27/2020 and for me 3.5k map changes takes roughly 4 hours, so I can say I spent around 294 hours or ~12 days of mapping WV in total, so you may get my concern. Of course, if you feel offended that your driveway is drawn, you can freely take that off, that's an acceptable reason (but somebody would draw it back probably, so it wouldn't make any sense). Though! I usually map the driveways as private to make sure it's no good for commercial traffic, just only for private usage.. 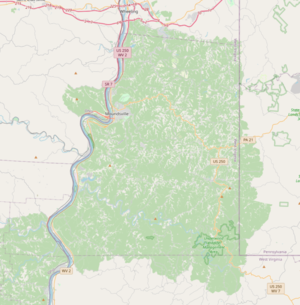 Marshall County WV and its surroundings on March 13, 2021