For the OSM Ireland Buildings project we are sending out stickers for mapping milestones. Tracked by the number of tiles completed in our tasking manager:

We initially organized a sticker design competition to engage the community in the design of the stickers:

Due to this one of the board members put forward a design, which was proceeded with. But this created a delay in getting the project rolling. 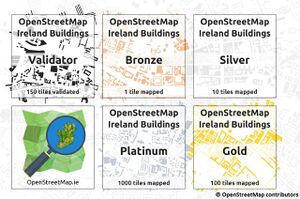 OSM Ireland Buildings sticker design
We were able to launch the project, and send out the first stickers in February:

With positive responses coming in from the community:

So far 67 stickers have been sent out. We hope to keep the remaining funds from the project to keep sending out stickers to people who apply for them. 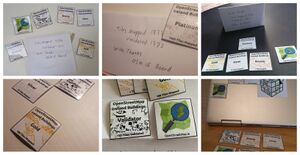 Stickers sent out to mappers
2 - Pull up banners Two pull-up banners were acquired to promote the OpenStreetMap community and the OSM Ireland Buildings project. Design was done by one of the board members. 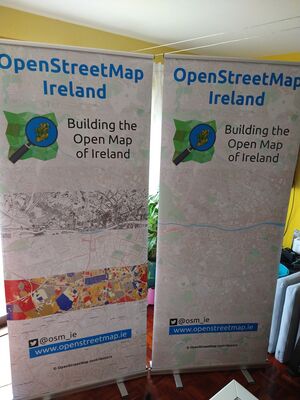 OSM Ireland Buildings Pull Up Banners
3 - Mouse Mats The mouse mats were ordered and sent out to mappers with over 10,000 buildings mapped in the OSM Ireland buildings project. 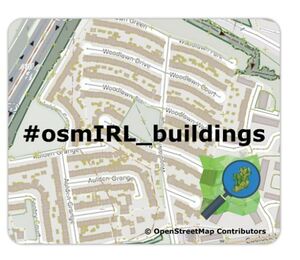 Mouse Mat Design
A total of 50 mouse mats were ordered, and 19 mappers so far have surpassed the 10,000 building eligibility threshold. We hope as the project continues more mappers become eligible. The mouse mats have been extremely well received by the community. 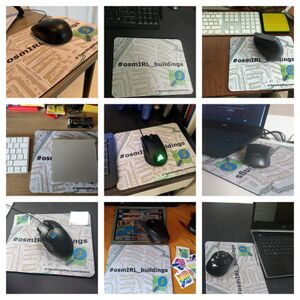 In October OpenSteetMap Ireland ran a competition, with the top 5 Mapillary uploaders receiving a micro SD card to boost the Mapillary effort on the island. The cards were competed for by fifteen avid uploaders. The recipients we very pleased to receive the cards which increased their ability to store images. 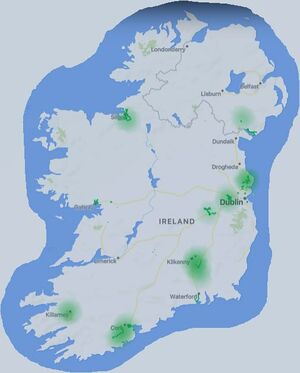 Mapillary Photos in Ireland During October 2020: Source Mapillary
A similar promotion was run coming up to our Wild Atlantic Way mapping event, which resulted in the whole Wild Atlantic Way being captured as a relation on OpenStreetMap. https://twitter.com/osm_ie/status/1399089956354674698 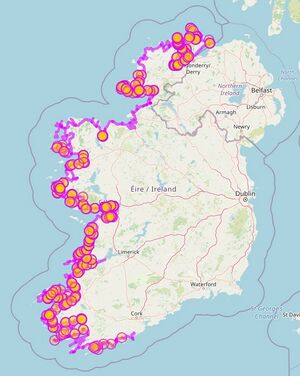 The initial campaign was run as part of our Map Patrick event (during St Patricks Day weekend 2020), which unfortunately ended up with 0 engagement and 0 spend. The way the ad was constructed it targeted people based on their professional affiliations and professional interests, qualifications and skills, and on review osmIRL realised that LinkedIn is not used by these people on weekends and holidays

The second one was to promote the Wild Atlantic Way mapping event.

The WAW campaign on LinkedIn consisted of a promoted post on LinkedIn.

The third LinkedIn advertising campaign was a general one to promote the community on LinkedIn.

The initial one coincided with a campaign for mapping the Wild Atlantic Way (WAW), a popular tourist driving route along the west coast of Ireland.

The second twitter advertising campaign was focused on building the community.

OpenStreetMap Ireland Buildings is a project aiming to map all of the buildings in Ireland. The project launched in January 2020. The mapping is being coordinated with a tasking manager at tasks.OpenStreetMap.ie.

The OSMF microgant funding came in early on in the project in September 2020. 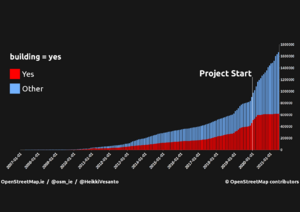 Buildings added to OpenStreetMap in Ireland over time
The contributions have had a spatial distribution, with certain areas with more active mappers being more extensively mapped. However there has been activity all around Ireland. Our mapping events as well have focused on areas with less contributions. 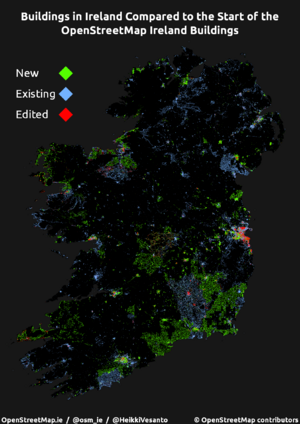 New buildings added to OpenStreetMap during the Building Ireland project
The rate of contribution increased significantly once the project was initiated and the quality of the tagging has also improved. With the bulk of the additions being more detailed than a simple building=yes. The tag building=house has even surpassed building=yes as the most common building tag. 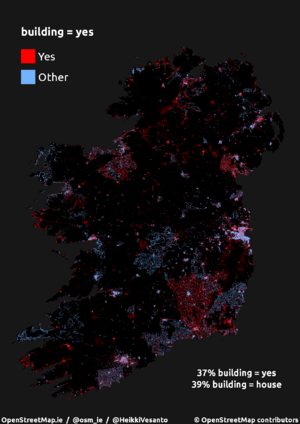 Buildings on OpenStreetMap with tag building=yes vs more detailed tagging
Overall there have been contributions from 2136 mappers across Ireland. 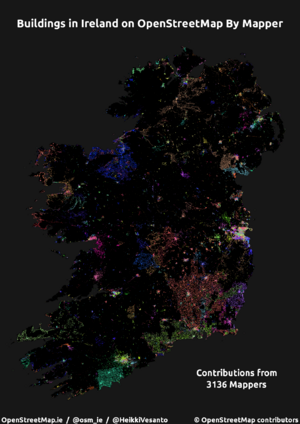 Each color represents the contributions of a single mapper

The community in Ireland ran three mapathons during the course of the microgrant to promote awareness of the project and foster the community.

The events were run online and covered a range of mapping tasks, but with a primary focus on mapping buildings.

The events generally had very good participation from the community with clear increases in building mapping activity. 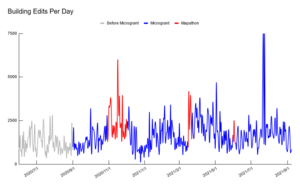 Building Edits Per Day in Ireland over the course of the microgrant *Edits on 2021/07/24 include over 50k edits to: "Updated deprecated roof tags with building: (such as building:roof:shape) to their counterparts without building: - where new tags already existed, I removed the old ones".
452,182 buildings were mapped in Ireland during the course of the microgrant period. The average number of mappers also increased, however this increase was not significant. 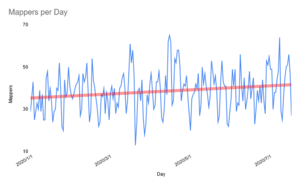 Mappers per day in Ireland with trend line

Please report on your original project targets, use the below table to:

We had good success with the Mapvember Mapathon, which engaged with people through lockdown. Promoting and growing the community.

There was perhaps some fatigue for online events in 2021.

Overall the results from the advertising were mixed. From a pure audience reach perspective the cost seems good, with only one cent per person advertised to.

From a cost per click perspective the spend was less successful. The cost was from €0.78 to €2.88 per click through to the website, which seems less value for money.

Overall from a mapper perspective there was no noticeable increase in the number of daily contributors .

The mapping projects chosen to promote may have played a part. The WAW project promoted by the LinkedIn and Twitter advertising was not a purely beginner one. The mapping involved adding roads to a relation, and even though we provided step by step instructions, this may have put some people off. Also the tasks on the tasking manager were slow to load. This was likely due to the quite complex boundaries used to split the tasks (townlands). We had a lot of success using townlands in our previous mapping event Map Patrick, but the WAW tasks had considerably more of them causing slow load times.

We have not had the engagement with the stickers as envisioned. We have tried to promote the availability. There might be more we could do, but are also open to feedback/suggestions on this front.

We would like to retain the remaining funds of €243.92. We still have a number of postage costs outstanding that are associated with the microgrant. These include sending out more stickers as people join the project and map tiles on our tasking manager. Also mouse mats as mappers cross the 10k buildings mapped threshold.

The microgrant has been very helpful at the start of our Buildings Ireland project. It has provided great motivation to the whole community, and contributed to the projects success so far. And has provided a great springboard for ongoing success.

Out SotM 2021 poster summarizes the progress in the project so war: https://files.osmfoundation.org/s/BD6HeiJiXTGkDMM

Step 8. Save your page

Press Save page and you've created your report. Thanks for helping improve OpenStreetMap!

osmfoundation.org to notify us that your report is ready for review. Remember to include copies of your receipts!