After discussion on the OSM mailing lists (imports-us@ and imports@), we began importing in late December, 2014.

How to get involved

Everything else found below on this page is background/technical information on the import which was prepared while this project was under consideration. It is not necessary to read on unless you want to learn more about how this project began.

The City of New Orleans provides us with a public domain shapefile with high-quality building outlines (153492 buildings, based on imagery from January 2013) and a shapefile of addresses (198568 points, commercial and residential).

According to data.nola.gov, the data is licensed CC0. (Public domain) 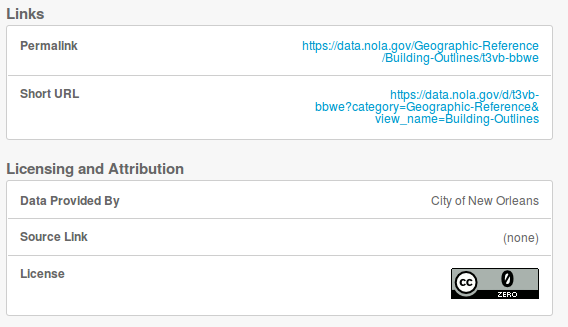 If building only contains one address, the following will be added to the area. In the case with multiple addresses in different locations within the same building footprint, these tags will go on separate nodes:

There are not a lot of buildings already in OSM for New Orleans. As of October 2014 there are 512. Most of these fall into the following categories:

Excluding these groups of buildings from the import will not be difficult to do manually.

This leaves only 131 buildings scattered around the city to review manually. This will be built into the review process. The majority of these were originally added by user Matt Toups who is also importing.

Similar to buildings, there are not a great deal of addresses to conflate. There are 119 ways and 990 nodes with addresses today. The ways are all buildings which are addressed above.

The nodes are POIs that should be kept. We will remove duplicate nodes from the imported data when the existing POI contains address data. (Or in some cases, merge the POI tags into the building outline)

Note: this is still in development at this time.

In accordance with Import Guidelines, each uploader will use a separate user account specifically for this import. The user name will follow the pattern: <regularusername>_nolaimport 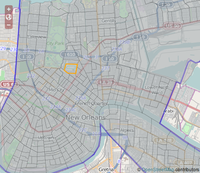 We will track who is doing what here: http://tasks.openstreetmap.us/job/41 (using the OSM_Tasking_Manager)

The city is divided up into 17 wards, each of which is divided into some number of precincts. Each region (ward/precinct) will be reviewed, uploaded, and verified. 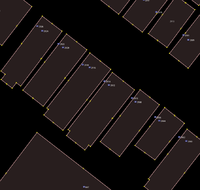 Address nodes may be slightly offset from building footprints, but should be ordered properly. Small adjustments like these can be made by local importers during our workflow.

We're starting to collect info from previous imports that may be helpful to our volunteers:

The folks who ran the NYC building import used a very similar process, and have a nice step-by-step video guide for getting started:

The results can be downloaded as a .zip file from here: https://github.com/mtoupsUNO/nola-buildings/releases/tag/v1.0

This is based on work from the DC and NYC building imports, thanks to the folks who made that possible.

convert.py is based on the work of dcbuildings but has been modified to work properly on the New Orleans shapefiles. It does the following:

This is how to use the scripts to generate .osm files:

Resulting OSM XML files will be written into the osm/ directory. You can view these in JOSM, Merkaartor, or Potlatch 2.

Please send feedback on the import scripts to Matt Toups.