A fund-raising drive and purchase of a new server, took place in December 2011

We reached the fundraising target on Christmas eve 2011, thanks to all the donors!

We have now received delivery of a new server. Details to come shortly 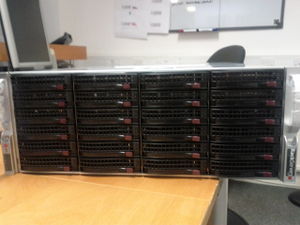 The following are the old details of plans for a fund-raising drive and the purchase of a new server. A more straightforward announcement appeared on the OSMF blog:

We are running this fund-raising drive while we invest in server infrastructure to improve reliability and performance of OpenStreetMap. If you’d like to support the project in this way, or you know anybody else who would like to give OSMers an early Christmas present, we'll be collecting donations on our fund raising site: http://donate.openstreetmap.org/server2011

We wanted to run another fund raising drive, because last time we had a big one was back in 2009 (old blog post) and we were blown away by how quickly we raised the target amount. It seemed as though people were looking for an outlet for their generosity and goodwill towards the project. Since we’re looking to buy a new server, now seems like a good time to do it again.

To be clear, the foundation is not short of funds at the moment, so we're not saying "We need this money or OpenStreetMap will collapse!" . The fund raising drive and purchase of a server, will help put OpenStreetMap on a stable footing for the future, as the project popularity continues to grow. (Finances are explained along with the 2010 balance sheet here)

The Operations Working Group, who have the important role of keeping core OSM services running smoothly, have planned to invest in a new server which will provide us with a database back-up. This improvement is at the very core of the OpenStreetMap infrastructure, giving services greater resilience. It means we’ll bounce back quicker and easier in the event of a hardware failure. In time the new server will also bring about some performance improvements.

We hope you’ll agree that, although these improvements are very much behind-the-scenes, they are important. Please help raise the funds, either directly, or by helping to get the message out.

Plans for the server

Whether the new server will replace the old or not - this isn't actually important, and is technically a difficult question about whether, in a fail-over situation, the backup machine can cope with the extra load. the important thing is that having this machine drastically reduces the probability of a worst-case scenario and improves capacity.