From OpenStreetMap Wiki
< Nottingham
Jump to navigation Jump to search

This is primarily a social event for East Midland mappers, but anyone who wishes to come & ask any kind of detailed question about OpenStreetMap is very welcome. We have a good range of experienced contributors who can usually give guidance on a wide range of OSM topics, from mapping to setting up a server. Typically we discuss a range of mapping issues in the first hour of the meeting.

We try and meet in pubs which meet are number of criteria: not too busy (making easily accessible by a range of public transport.

Despite its name and origins we are now aiming to form a nucleus for anyone in the East Midlands. To that end we now meet in Derby once a quarter (Feb, May, Aug and Nov), occasionally in Sheffield, and may meet elsewhere if an opportunity comes up.

Our FUTURE MEETINGS are CANCELLED.

Check the venue for the given month.

If the pub is busy look for a table with GPS devices and possibly various OSM maps and/or paraphernalia. I have a(n old) logo which I hope to be able to put somewhere reasonably prominent. If all else fails you can call me (Jerry) on 077 9103 4742.

Located in the market square close to the famous spire fo the parish church. A short (under 10 minute) walk from the station and even closer from the bus station. There is car parking at Holywell Cross ("The Doughnut"), at Rose Hill and possibly at others nearby (though check the closing time of multi-storeys).

The Lincolnshire Poacher is readily reached by a short walk (10 minutes), or a hot cycle ride (if on a Brompton) or by bus from the city centre, but is directly on bus routes from the North of the city.

There is parking in the immediate local area near The Arboretum (free across the road from 20:00). Bike parking is available just to the S of the pub: and is marked on OpenCyclemap. Recent experience suggests that this is not safe, many people take bikes into the back room of the pub or lock them up in the outdoor area.

The pub usually serves food, but there are a number of fast-food outlets nearby (some of dubious quality).

The Brunswick is 200 metres from Derby railway station (turn right out of the main entrance and walk along Walkway Terrace). It's also about 600 metres from the bus station.

The pub does not serve food on Tuesday evenings.

There are still some wholly unmapped sides of shopping streets in the town centre, and also the turnover of businesses at the "value" end is quite high, so a recheck of what's already mapped is welcome.

There are still a few missing businesses in the centre of town, so a recheck of what's there wouldn't come amiss. Some industrial areas (Alfreton Road, Darley Abbey Mills) are also incomplete.

Many or most housing in the city is unmapped and unaddressed, so there's plenty to keep everyone busy there.

Area N of pub on E bank of Derwent near Little Chester looks a reasonable target for pre-pub mapping.

These are still fairly informal (at some stage I may start making cake slices). Currently the following look like interesting candidates: 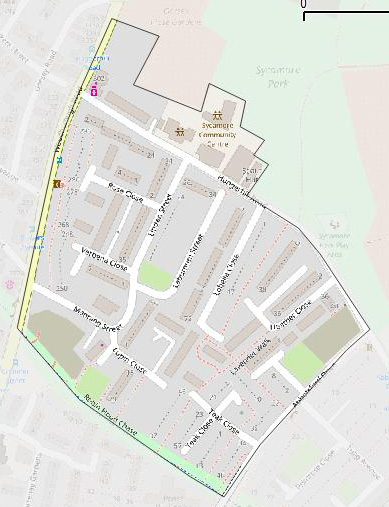 In practice if there are 2-4 experienced mappers we may divide up to pursue these tasks. Anyone not familiar with mapping is very welcome to come along, and even choose what we should map. The area around the Lincolnshire Poacher includes a wide range of different urban environments so there is plenty of variety in what we can map.

Potential Discussion Themes for the pub

Some dates may change to avoid clashes with other Open Data/OSM events. We hope to move around a little more this year in the East Midlands area. So the last meeting in the quarter may change location from Nottingham.

There is a custom short link suitable for tweeting at http://tinyurl.com/NGosmPub.