Nottingham is a city with unitary authority status within the ceremonial county of Nottinghamshire, in the East Midlands region of England. Pub Meetup held monthly, usually at Lincolnshire Poacher, Mansfield Road from 19:30 on 3rd or 4th Tuesday in the first & third months of each quarter (we are in Derby once a quarter).

There are a few things which are familiar to regular and experienced mappers in Nottingham, which may not be obvious to those mapping during a visit or correcting and updating map data. Please pay particular attention to the following points:

ALIGNMENT WITH IMAGERY. Much of the area has been initially mapped from Yahoo aerial photography and is out of alignment by anything up to 20 metres. Other information is from old out-of-copyright maps and has a similar or greater degree of inaccuracy. A small part of the data has been realigned from GPS traces. This is a tedious and time-consuming process so has only been done when absolutely necessary to maintain topological relationships. Please be cautious before realigning any ways/areas to Bing imagery. It is best to check and realign the Bing imagery with available GPS traces before commencing editing. The Yahoo imagery was superseded by the more recent Bing imagery which is superior and covers the entire city. Most Bing imagery is 2013 until zoom level 20, when (better) images appear which are dated around 2008. The 2013 imagery does not cover the Northern edge of the City (checkout Tesco in Bulwell to see how confusing this can be). At the edge of the city some imagery is as old as 2001. You can examine the metadata associated with imagery tiles on JOSM. SK53 is in the process of setting up a grid of imagery offsets (initially at around 1km spacing) across the city for use with Zverik's imagery offset database.

NOTTINGHAM OPEN DATA. This is a fantastic resource, but if you are using it to add to OpenStreetMap, DO NOT USE ANY INFORMATION FROM THE MAP VIEW. Unfortunately the map view contains non-open data which requires a suitable licence from the Ordnance Survey. The only data which has this licence is that for Public Rights of Way. Some other data contains co-ordinates, often these are of the relevant postcode centroid. IT IS RECOMMENDED that this data is used as a source for driving surveys, or cross-checking against other sources (particularly useful if you remember a POI from a past visit & want to know if is still there before mapping it). Imports MUST be discussed with members of local community before any action is taken. In particular avoid the streetlamp dataset: streetlamps are being replaced across the city, the data set changes frequently and is not suitable for import.

The highest quality data in OSM comes from the result of on-the-ground surveys. These can often be supplemented by other on-line material to enhance the surveyed data with features which it is difficult to observe accurately.

However, many parts of Nottingham, have been armchair mapped using a wide range of sources. These are discussed below, listed in a rough chronological order of usage.

Most of Nottingham was covered by Yahoo imagery: areas missing were Carlton, Gedling, Arnold, and everywhere N of Valley Road. Unfortunately the imagery had a significant displacement (around 10 metres) along a N-S axis, and much detail was added before this was realised. At the time it was not significant because the amount of really detailed mapping was limited, and the focus was on ensuring topological correctness. Over time this displacement has become more of a problem.

Areas outside the Yahoo imagery were often originally traced from NPE maps: for instance council estates in Bulwell, Sherwood and Bestwood. Virtually all of this has been replaced by subsequent realignment with Bing or OS Open Data, and in many places by GPS tracks and surveys.

NAPTAN data were imported for Nottingham and Nottinghamshire on 19 September 2009. Message from NAPTAN administrator read:

The NaPTAN bus stop data has now been uploaded for Nottingham and Nottinghamshire.

Details for merging the data with existing OSM data can be found on the wiki: NaPTAN/Surveying_and_Merging_NaPTAN_and_OSM_data

The data was used to derive road names in areas which were unmapped in 2009/2010. Of course, a standard OSM survey should be carried in the long run.

The data was uploaded in these changesets: Nottingham - [1] Nottinghamshire - [2]

As of 2013-09 much of this data is now 4 years out of date and many nodes have not been re-surveyed to remove duplicates. A comprehensive check of this data in the city is needed.

Available from 2010. Used to add road names to existing roads which had been arm-chair mapped. The ITO comparison layer and OSL Musical Chairs were used to hunt down missing roads at a later stage. Some areas, notably Top Valley and Rise Park were mapped entirely from OS Open Data (despite the notice above).

Some boundaries, mainly ward boundaries, were added from Boundary Line. Others, such as the Nottingham City Council boundary have not been corrected with this data.

A limited number of features were included from OS Vector Map District: mainly rivers as areas.

The availability of Bing imagery enabled much greater refinement of both existing areas, and particularly places which had not had any aerial imagery before. Bing provided very high resolution imagery (to z21) from around 2008. This allowed very detailed mapping of buildings. Around March 2014 these detailed zoom levels have disappeared and the new 2013 imagery is not of the same quality.

Some details of cycle routes was added during 2012 from DoT cycle data using [Sanpshot Server].

Over the past 4 years (from 2012), Nottingham City Council have released a large number of data sets under the OGL. Many of these have proved extremely useful as both sources of data for OSM, or as tools to drive particular surveys. Specifc data sets which have been extensively used:

All roads throughout the conurbation are mapped. LCN/recommended cycle routes are marked in most of the city centre, and south of the Trent, but may be incomplete to the N & E of the conurbation.

Licenced premises (pubs, some restaurants) were mapped systematically in 2013, and effort is made to maintain this, food hygiene premises & generally any retail outlet up to date.

Addresses have been mapped extensively, largely by Will Phillips, SK53 and AlexKemp. Again details are better to the S & W of the city centre (postcode areas NG2 (N of Trent only, NG7, NG8 and NG9) and in the city centre itself (NG1). More recently many parts of NG3 and NG4 have been added. In general the primary target of address mapping is to complete the inner city suburbs: Radford, Hyson Green, Forest Fields, St Anns and Sneinton.

A more detailed picture of the current status by area (cake slice) is shown below.

The boundary of the city/unitary authority is complete but possibly inaccurate (see talk), ways which are part of the boundary are members of a relation 123292

More information on mapping particular features is on the Nottingham/Features page.

Kev - Lives in West Bridgford and mapping most of the area south of the Trent, particularly cycle routes - hoping to map these more fully when the weather gets somewhat warmer. NTU City and Clifton campuses have been mapped.

Rob - Did some of the major roads, and bits in Bramcote and Wollaton. Unfortunately not based in Nottingham, so only doing bits and pieces when visiting family.

Russ Phillips - Done some bits and pieces (some using Yahoo's aerial imagery). Not based in Nottingham, but has friends there, so visits sometimes.

Will Hebden - Working in Nottingham, so able to start filling in the city centre.

Will Phillips - Lives in Stapleford and primarily mapping the western suburbs of Nottingham and the surrounding countryside.

SK53 - Comes from Nottingham and is in the area frequently, usually maps on SW and W side of city.

Greater Nottingham area, has been split into 'cake slices' with the following outer boundaries: S.of the Trent, includes Nottingham City areas of Wilford and Clifton and the West Bridgford area of Rushcliffe district; N of the Trent, bounded to the W by the River Erewash (border of Notts and Derbys) until crossed by the M1, then by the M1 to Long Lane (Watnall), to the N by Watnall Road, A611, City Boundary (S of Bestwood Country Park) and then across country to Dorket Head, to the E from Dorket Head along Mapperley Plains, along Arnold Lane, Colwick Loop Road (A612) to the Trent at the Netherfield Railway bridge.

Much of the following may be significantly out-of-date! 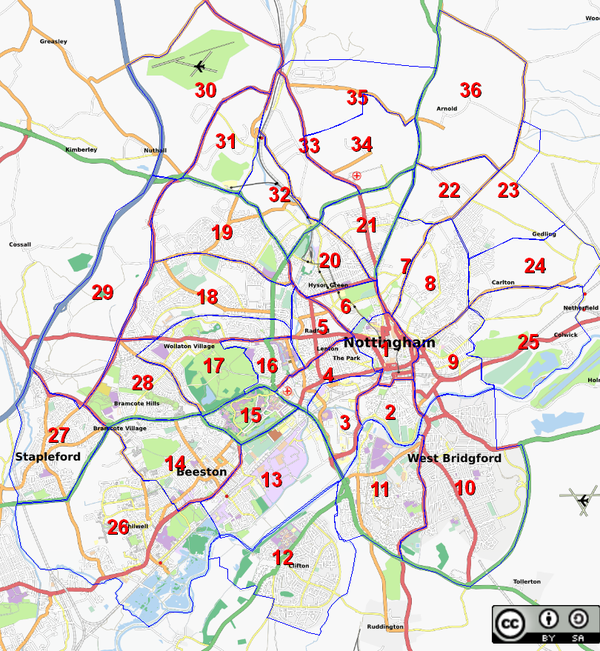 Map showing the areas tabulated below.

The status of each map region is indicated by a symbol, which describes the type of feature, and a colour, which indicates the completeness of that feature in a map region.

The status is displayed using a template Template:State

The English translation is Editable here.

Nearby towns and areas

The usual caveats apply w.r.t to copyright on these sites.

Bits and bobs noticed whilst mapping, in no particular order. 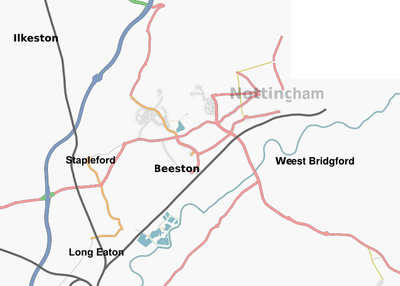 Map from 2007, very little of the city had been mapped. 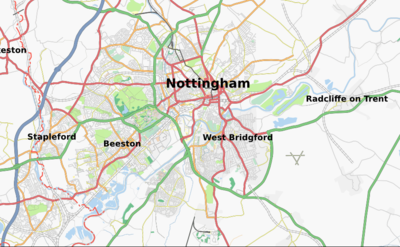 A massive change can be seen 20 months later. 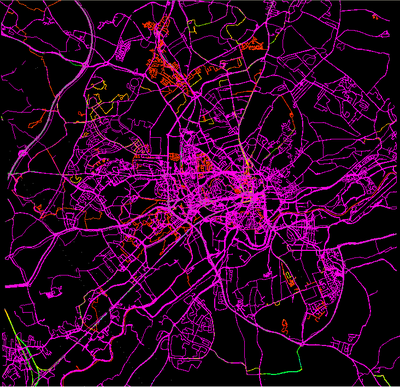