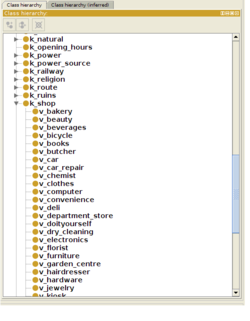 OSMonto is an ontology of OpenStreetMap tags, created with the purpose to ease maintenance and overview of existing tags and to allow enriching the semantics of tags by relating them to other ontologies. It has been developed at University Bremen and DFKI Bremen by Mihai Codescu, Gregor Horsinka, Oliver Kutz, Till Mossakowski and Rafaela Rau. OSMonto was presented at SotM-EU 2011 [1] and developed as a research paper [2].

In OSMonto, tags are decomposed into a hierarchy according to the keys: the key becomes a superconcept of its values. This approach was followed whenever the value was an OSM constant rather then a string/numeral. Since it is possible that a key and a value have the same name whilst the names of the concepts are required to be unique in OWL, we decided to prefix all keys with k_ and all values with v_.

The source for the tags implemented is mainly Taginfo. To reduce noise, only values which occur more than 100 times are included. In addition, tags that are in the OSM wiki but not covered through the search of Taginfo are also implemented.

The OSMonto ontology can be found as an .owl file [3] and can be viewed with tools like e.g. Protégé.

OSMonto is already used within the DO-ROAM project [4], an activity-oriented route planning tool for OpenStreetMap. The source code of the project can be obtained freely at [5]. Here, OSMonto serves as a connection between the database and the activities that can be selected by the user, also organized as an ontology.