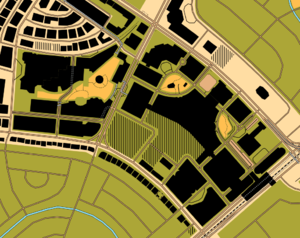 OpenOrienteeringMap (oomap.co.uk/) is a custom Mapnik rendering of worldwide OSM data (most of it) loosely using the orienteering map specifications (see Wikipedia article or IOFmapping on this wiki) defined ISOM (with a few features borrowed from ISSOM). This rendering is created by Oliver O'Brien.

There are two styles: One is the Street-O and the other is Pseud-O. The Street-O style shows mostly roads and footways in a map style often used in urban orienteering. The Pseud-O style is a "less serious map" that mimics depiction of most features of normal orienteering maps.

The rendering is done on-the-fly, but with caching. The two styles are available from zoom levels 12 to 18. Levels 15 & 16 roughly correspond to scales that would be used for conventional orienteering.