Archival purposes only - service offline since at least October 2015. Known last time alive in 2010. Possibly you still can use the code on your own machine. 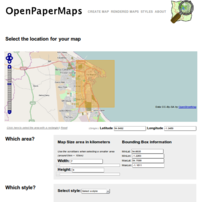 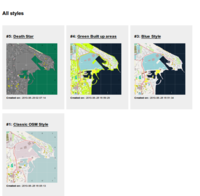 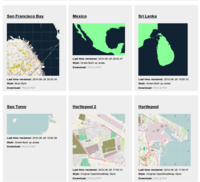 This projects is based on the initial work from Graham Jones on townguide (http://www.townguide2.webhop.net/), a web application with a Python renderer that lets you set up a bounding box from OSM data to render it and embed it into a PDF.

This projects uses the original renderer from that application and follows the Django pluggable app pattern to bring a flexible solution to create customizable maps.

Some of its features are:

OpenPaperMaps consists currently of three modules: Townguide which is a wrapper around Mapnik and Reportlab to embed maps created with OSM data on a PDF, djtownguide which is a Django application that provides a web interface to its features and mapnikstyleshare another Django application, which gives djtownguide the capability to select a style, plus some minor styling abilities to the maps.

for this project. I recommend using Mapnik2 since it introduces the use of scaling factors to render map objects. This is very useful since this way the rendered map quality is better suited to the area of the selected paper.

Unfortunately, it seems that when trying to install it with `easy_install aggdraw` the freetype support is not enabled thus you will need to install it from source.

Now let's install the modules of this project.

If you want to use the Cascadenik, you should add the branches to your path rather than installing them.

Inside of the `openpapermaps` folder you can find an example Django project that is configured to use djtownguide and mapnikstyleshare. In order to use it copy `settings.py.example` and set up the following:

First, create the folders where the maps and style thumbnails will be saved. These need to be writable by Django.

The folder where you save the styles also needs to be writable by Django:

If you're using mysql you can create it like this:

I think you can make it work with postgresql by setting the tababase in settings.py to postgresql-pscycopg2. You need to change the database access restrictions as described in the [Mapnik/PostGIS] wiki page to avoid 'access denied' errors. (GJ 05sep2010

The daemon is a Twisted application that fetches the latest submitted maps and renders them with mapnik.

You can modify the behavior of the daemon on the fly by connecting to its process with: `telnet localhost 2323`

Now enter one of the following options:

If you want to debug the daemon it is useful to do `tail twistd.log -f`

Starting the django application with twisted

Instead of using the development server of Django, you can use the one from Twisted web. You can start the server like this:

This initial work that I did for GSoC was very fun in doing, and some of the features that I would like to be working in the near future are:

For support on this project you can contact: wquevedo [ at ] acm.org, or add a ticket at http://redmine.openpapermaps.com

The current specs of the project can be accessed here:

Redmine of the project: http://redmine.openpapermaps.com/

State of the Map Conference by Mike Migurski: http://vimeo.com/5593879