Open Street Maps is still very desktop-oriented. There are a growing number of handheld applications too, but hardly any maps have appeared in print. These are some of the few maps that did make it to the paper level:

How come there are only so few? It's definitely not because nobody needs them. Maps for sale in shops are sometimes expensive, and the ones that you get for free in a tourist office often include commercials or they are just plain ugly. So perhaps OSM can help out?

If a layouter wants to prepare a street map for print, he needs an illustrator file (or perhaps inkscape) - a format that he recognizes and can edit to his wishes. However, that's not easy to do: getting a map out of OSM involves many inbetween steps that require familiarity with things like "terminal, JOSM, Java, Osmarender, xml,...". Enough to make a layouter dizzy.

So let's dream of a simple visual interface to get from OSM to an illustrator or inkscape file. Of course, making some manual corrections during layout will always be necessary, but the interface could help to filter and organize even before the rendering is done.

This first step is pretty clear: a wysiwyg selection tool. 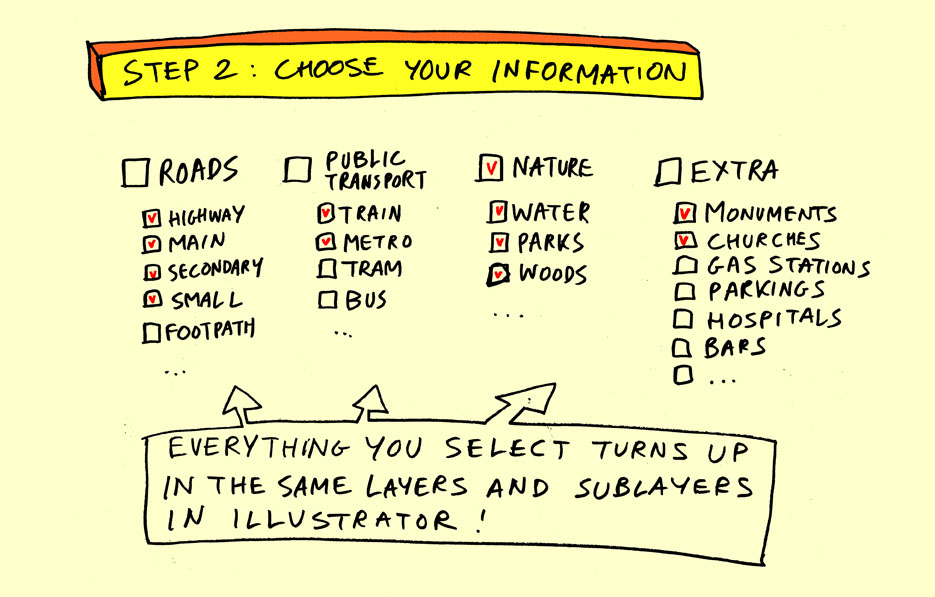 When you download a map from OSM, you always get the full monty. Big areas (like an entire major city) generate very complex files, almost impossible to open or edit. So that's a first problem to tackle. Perhaps files could become smaller if they are more filtered? Everything that the layouter doesn't need on paper can be left out from the start.

This guy already developed a system with tick-boxes to select information:

Can something like this be included in an interface? Furthermore, is it possible to get everything into a correctly-named layer in illustrator or inkscape? For example, the layer 'ROADS' contains sublayers 'highways', 'main', 'secondary' and 'small' if those are the selected layers and sublayers. 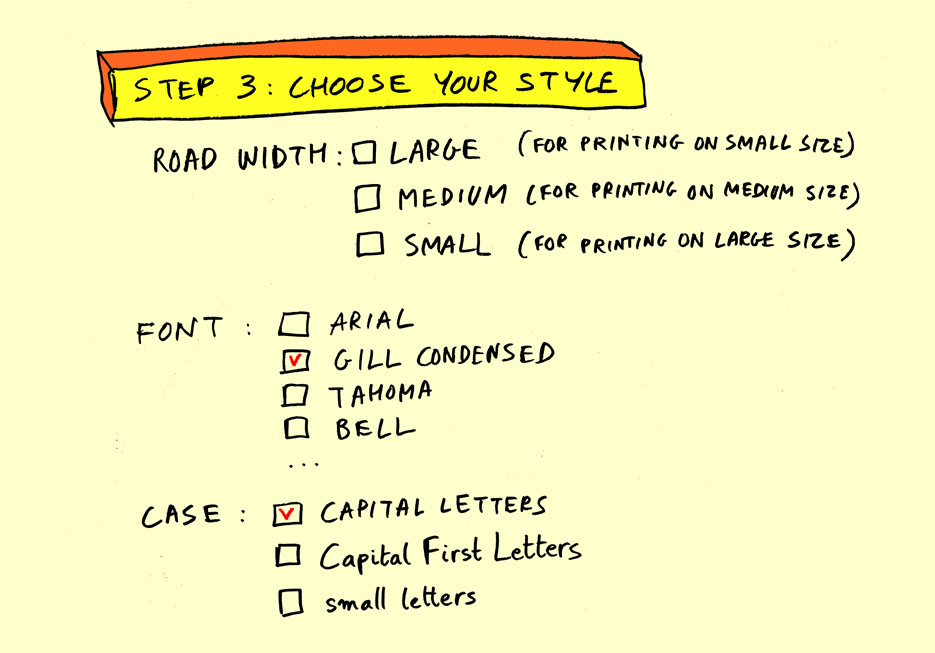 The guys at Cloudmade have done an impressive job when it comes to customizing maps. Not only is their interface wysiwyg, but it is also very user-friendly. Our grandmothers could use this, so to say. However, colour and stroke thickness are also easy to change for a layouter in illustrator. The main issue for him/her are SCALE (the width of the streets) and FONTS. Scale has been integrated in the Style Editor (you can choose the width of streets), but typography hasn't. Is it possible to select a font, and even to select the CASE of the font (capitals or not) before exporting the data into illustrator or inkscape?

And then go! In the layout program, the layouter will still be able to add markers and icons of his/her own choice, change colours in the layers and sublayers that he/she wants (for example: change all the parks to purple) and add a legend. Of course, some details on the street map will still have to be changed manually, but that's just how cartography works.

These are some of the problems that recur when trying to write an illustrator file from OSM:

Is an interface like the one suggested above an illusion? Will it never be as simple as that? Perhaps not, but there seems to be enough expertise in the community to make it work. Some of the best ideas just need to be put together into an interface that is grandmother-proof... Who is up to the job?