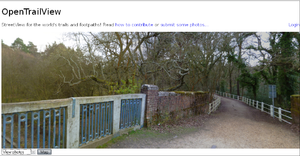 OpenTrailView (OTV) here is a platform to upload 360 degree panoramas of off-road routes such as footpaths and cycle paths. The aim is to create a similar piece of software to Google Street View but for footpaths, using open licencing, and using underlying OSM data to link panoramas so that users can navigate from one panorama to the next. As of 2019 this project has restarted and was presented at FOSDEM 2019. The source code is available on Gitlab as part of the Freemap project.

In the original version of OTV, presented in Girona in 2010, standalone, cylindrical panoramas were created and positioned manually. The procedure involved creating panoramic shots with a regular camera together with GPX traces to position the photos based on the exif timestamp and GPX timestamps. Separate stitching software such as Hugin was used to stitch the individual shots. This complex procedure dissuaded contributors and the project was in a dormant state from early 2011 to late 2013. However, with the advent of Photo Spheres on Android phones, the possibility of the project attracting greater interest due to lower barrier of entry arose. Thus work on the project restarted (Oct 2013) as "opentrailview2", however photo spheres were still rather niche at the time. 360 cameras have now become more mainstream though, hence a further resurrection of the project as OpenTrailView 360. This version aims to combine features of OpenTrailView 1 and 2 to accept any panorama in equirectangular projection.

A new and particularly interesting feature, not present in earlier versions, is that underlying OSM data is used to auto-link panoramas together to allow navigation in Street View style.

OTV 1 features such as positioning panoramas using timestamps in GPX traces to allow location of panoramas without location metadata have been reintroduced.

With the new version, OpenTrailView 360, you can:

A recent browser will be required as the site uses ECMA6 and ECMA8 features.

Initially the whole of Europe.

With the appearance of consumer-level 360 degree cameras, the OpenTrailView project has been resurrected by its author, nickw.