An automatic station where customers can collect a parcel they ordered from a retailer or an e-retailer. You can usually find these services in train and subway stations and shopping center. It looks like small lockers the customer can open with a code to pick-up its delivery.

This is an exemple of the amenity in the station Bibliothèque François Mitterrand (Paris, France). The service is entirely automatic and located in an hallway near the exit of the station. 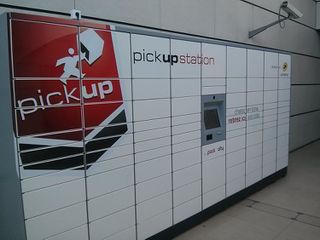 There is at least two companies that provide this kind of service in UK and France : Doddle and Pick-Up (subsidiary of La Poste)

This tag will be used in the project of indoor cartography of french train stations.

This is a specific service wich cannot be tagged with amenity=post_office because it's not an office at all and is usually located in an hallway and not in a specific room or amenity=post_box because you don't post parcel in it but collect it.

I know the amenity tag is overused, however it's important to stay consistent with amenity=post_office and amenity=post_box wich describes similar services.