The proposed tags are:

Communication towers which are used for broadcast or two-way communications via radio waves; such as radio, television, cellphones and two-way radio. Each tower may have 1 or 2 more transponders (antennas) attached to it, which is why this scheme abstracts out the transponders.

It is often possible to use these for visual orientation. In the case of cellphone towers, there are concerns about having these placed close to homes, so home-buyers might be interested in seeing their location on maps. 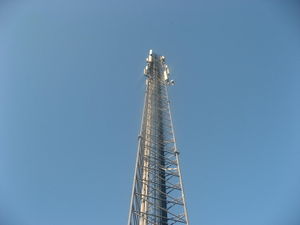 It is suggested that the Communication Tower node be rendered as follows:

The renderer may wish to use the height tag to gauge the size of the tower, to render the icon at different zoom factors or at different sizes.

It is suggested that the Communication Transponder node would not be rendered.

Some general tags which are used across many other types of object are used to tag communication towers:

Tags which aren't shared with other OSM features are prefixed with the "communications_tower:" namespace.

A guy is a structure for keeping a tower or its upper part upright. Some wire antennas look also like guys, but are not used for keeping the tower upright. A tower only using such device is free-standing. The course of guys and antenna wires should be drawn-in.

Most communication towers will carry multiple transponders, each transponder must be characterised seperately and a relationship between the tower and the transponder made.

In some cases a communication tower will only serve a single channel/frequency (ie. a single transponder), in which case the 'Communication_Transponder' tags may be applied directly the tower's node. It is unlikely that a single antenna would be mounted 1/2 up an (expensive) tower, so the height/ele tags should be consistent between tower and transponder.

There are also towers, which serve directly as antenna. Such structures are called mast radiators and are most common for frequencies below 10 MHz. Most of these towers are guyed and are insulated electrically against ground. However, there are also free-standing towers used for this purpose and some towers, which serve directly as antenna, are grounded.

It is also possible that a mast radiator carries antennas for transmission on higher frequencies.

Some general tags which are used across many other types of object are used to tag communication_transponder:

Tags which aren't shared with other OSM features are prefixed with the "communications_transponder:" namespace.

These are included to suggest a scheme, but are not recommended for placing into the main OSM database.