From OpenStreetMap Wiki
Jump to navigation Jump to search
Key:access - Other languages

Access values describe legal permissions/restrictions and should follow ground truth; e.g., signage or legal ruling and not introduce guesswork. It does not describe common or typical use, even if signage is generally ignored.

It is a good idea to mark restricted parking as a restricted. Add access=private tag to mark it as a parking with heavily restricted access, with general public not allowed to use it.

Some cases are simple: "no entry" will typically be access=private without need for further tags

Note that it notes access, not ownership. Many privately owned roads are freely accessible for the general public without prior permission- in such case access=private would be wrong and it may be access=permissive if the owner can revoke this permission at their own discretion. Privately owned roads can even be -depending on the legislation- public roads in the sense that the owner has a legal duty to allow the general public access and is not free to revoke this permission (access=yes). 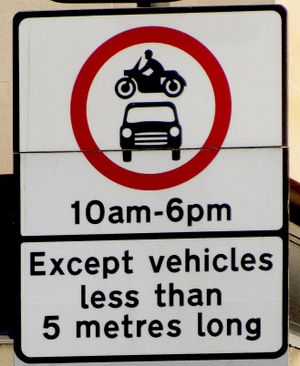 Apart from the access tags documented above, there are also various other tags that restrict use of infrastructure.

When cyclists are allowed to travel in the opposite direction: oneway:bicycle=no

In addition one may specify also what allows cyclists to travel in both directions: