From OpenStreetMap Wiki
Jump to navigation Jump to search
Key:mtb - Other languages

mountain bikes since 2009. This key was not documented until April 2020 and its actual use is not very clear, but points more towards practical suitability then legal access-restrictions as meant in Key:access.

mtb=* often appears to have been used to describe whether a path or road is suitable for mountain bikes, rather than describing the formal legal accessibility different from the legal access for bicycle=* in general.

Current usage on roads and paths Key:highway also points towards practical suitability instead of formal legal accessibility specifically for mountain bikes (instead of bicycles in general) as meant in Key:access:

Another indication that mtb=* is not used in the sense of access=* is that a legal nuance like mtb=permissive -which might be expected on outback trails- is only used very rarely compared to mtb=yes: ratio 1:1.000 (Taginfo). In comparison bicycle=permissive is used in a much larger proportion of cases: ratio compared to bicycle=yes about 1:50 (Taginfo).

Although current usage on roads and paths seems to describe practical suitability, a better alternative to describe this would be the keys mtb:scale=* and/or tracktype=* sac_scale=* smoothness=*, since it would not only indicate whether a path or road is suitable, but also specify how difficult it is for mountain bikes of different levels.

As described above current usage does not suggest that mtb=* describes formal legal accessibility as meant in Key:access.

Furthermore usage to describe legal access specifically for mountain bikes (as opposed to bicycles in general) would be also expected to be rare, since in most countries and situations all types of (non-motorised) bicycles are treated equally in regards to legal access.

Besides the lack of relevance for a legal distinction between mountain bikes and other types of bicycles, it would be very hard to legally accurately define the difference between a "mountain bike" (example 1 / 2) and for instance a "hybrid bike", (example), "cross bike" (example) or "monstercross gravelbike" (examples) 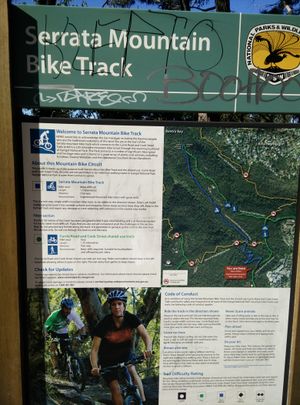 Serrata Mountain Bike Track Board Map. This board is an example with information for mountain bikes and general bicycles.