Consider using the cycleway:left=lane and/or cycleway:right=lane tags instead for a cycle lane which is on the left and/or right side.

Note that "right" and "left" are relative to the direction in which the way was drawn in the editor, and not necessarily the direction of real-world travel. (In the iD editor, for example, the direction is indicated by arrows at the mid-point of each segment of the way.) 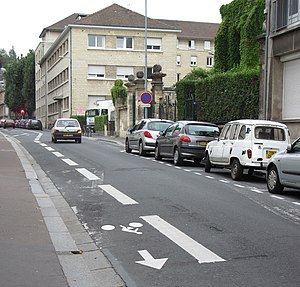 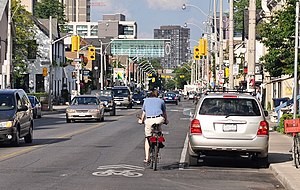 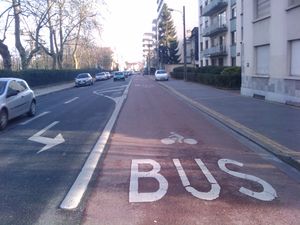 cycleway=opposite_share_busway
On a oneway=yes road, this is a special contraflow lane that is reserved for public transport on which cyclists are also allowed to bike in the opposite direction to general traffic.
Note: This value has some problems, see #Problems with opposite* values

A cycle track is separated from the road by curbs, parking lots, grass verges, trees, bollards or another physical barrier, but is running parallel and next to the road. In North America this is called a protected bike lane, separated bike lane, bike path, greenway, green lane, or class I facility.

cycleway=separate
Can be used to indicate that a cycle track associated with a highway has been mapped as a separate OSM element (i.e., is tagged with highway=cycleway). Usage is limited, but the meaning is similar to the use of sidewalk=separate, and can potentially be used when simplifying geometries for rendering. It also acts as a hint to avoid duplicating an existing cycleway by adding cycleway=track to a highway. It has the same intended meaning as cycleway=sidepath. Don't confuse with segregated=yes

Problems with opposite* values

opposite* values were invented in a time when using oneway:bicycle=* and suffixes for directions and sides were uncommon. But the tagging system evolved.

As several paragraph on the discussion page show, opposite* values are problematic as they combine the direction and the infrastructure in one value and do not leave room for different types of cycleway on each side.

A better alternative, seems to be using oneway:bicycle=no together with cycleway:left=* and/or cycleway:right=*. See discussion page.

Note: As the discussion on Talk:Key:cycleway:left shows, opposite* are no valid values for cycleway:left=* and cycleway:right=*, which is another point for consistently using :left and :right instead of opposite*.