From OpenStreetMap Wiki
Jump to navigation Jump to search
Tag:highway=motorway - Other languages

The tag highway=motorway is used to identify the highest-performance roads within a territory.

For roads which do not meet the above requirements consider using highway=trunk (high-importance non-motorway roads) and/or motorroad=yes (motorway-like access restrictions), subject to local tagging conventions in your country. See Highway:International equivalence for guidance on the use of the highway=motorway tag in different countries.

shoulders along each carriageway, but you may use shoulder=no to indicate missing shoulder. If a motorway uses emergency bays or emergency refuge areas instead of a shoulder then highway=emergency_bay can be added to nodes where they exist.

In some places areas some highway=motorway allow cyclists and pedestrians (on a shoulder). It means that explicit foot=no, bicycle=no, shoulder=yes may be useful even if seemingly obvious[1]. 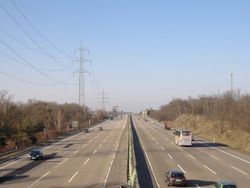 At a toll plaza, do not fork the motorway into multiple parallel highway=* ways to represent the lanes approaching the tollbooths.

You may draw parallel ways around the sides of the tollbooths, but only in the immediate vicinity of the physical separation. For example, in the photo at right, the motorway would fork where the concrete barriers begin. Use change:lanes=* to indicate a lane change restriction extending much farther back from the tollbooth.

It is 100% fine to have single highway=motorway line even if there are tollbooths physically splitting it on a short distance, like with other very short physical barriers.