From OpenStreetMap Wiki
Jump to navigation Jump to search
Tag:highway=traffic signals - Other languages

If the traffic signal is not separately mapped, the node that is the actual crossing between the road and highway=footway/pedestrian should be tagged with highway=crossing + crossing=traffic_signals.

If every signal is represented by its own single node (recommended), add a node with highway=traffic_signals on the place the cyclists has to stop and use the following tags to add additional details, see #Tagging also cycleway traffic signals for an example. In countries where cyclists are not legally vehicle drivers, it is good practice to also tag the crossing but only with highway=crossing and crossing=traffic_signals.

If the entire crossing is represented by a single node (not recommended as the attributes mostly differ from the traffic signals used for cars) add highway=traffic_signals to that node.

One of the most common values of road_marking=* is road_marking=solid_stop_line, corresponding to the line that indicates where vehicles must stop and wait for a red signal.

If the traffic signals are mounted on a mast arm or other gantry structure, draw a way corresponding to where it extends out above the roadway, then tag it as man_made=gantry. Do not connect the gantry to the highway=* way. Depending on the country and type of intersection, a traffic signal gantry may extend over the near and/or far side of the intersection or diagonally across the intersection.

Map the signal controller box as a node and tag it as man_made=street_cabinet, street_cabinet=traffic_control.

The mapping of traffic signals is an abstraction that the particular junction or way is regulated by traffic lights. It is not a representation of a particular device. Thus, because traffic signals can affect routing decisions, it is important that they are attached to the ways to which they apply, and not placed beside the way.

For simple intersections, just tag the intersection node. The same applies to traffic signals which are not part of any intersection, e.g. before tunnels.

The horizontal ways are actually one large way, represented by two one-way streets. The problem now is that traffic signals should ideally be applied to each way exactly once. As of now, there is no well established convention on how this problem should be ideally solved, but possible taggings which are currently in use are listed below.

Add traffic signals to the common nodes in the junction. This will create two separate traffic signals for the vertical way. It is up to the routing software to count nearby signals as one for timing purposes. Many junctions are tagged this way due to simplicity. 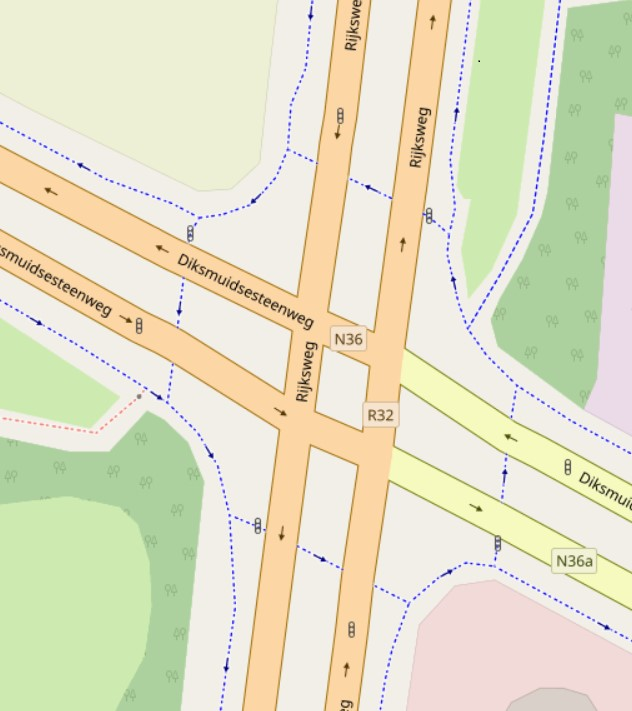 As before, put a traffic signal on all incoming ways of a junction. The difference is an extended meaning of "incoming ways".

In some countries (such as Japan), people orient themselves in the local area using the names of traffic signals or traffic signal systems rather than the names of streets. While street names may also exist, they are less important for orientation. See Named spots instead of street names for details. Note that Korea and Nicaragua used named intersections, but these are tagged as junction=yes and reference_point=* respectively, not highway=traffic_signals.

For simple intersections (single node) or for single traffic signals on the open road (single node) simply use highway=traffic_signals together with a name=* tag.

Note: Do not use junction=yes at all if you have a named traffic signals. junction=yes is only for named junctions (which means that if a node is tagged with highway=traffic_signals + junction=yes + name=*, the tag "name" is the junction name).