Named spots instead of street names

In some countries (Japan, Korea, Nicaragua…), people orient themselves in the local area using the names of road junctions or traffic signals or reference points (landmarks) rather than the names of streets. While street names may also exist, they are less important for orientation and navigation.

If junction=yes and highway=traffic_signals are both present on the same element, than the name=* tag is more likely to be the name of the junction (and not of the traffic signal). 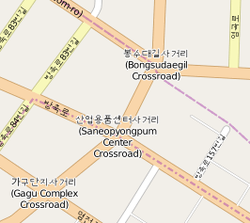 For renderers, it is reasonable to render all variants of this feature – junction names, traffic signal names, reference point names – with the same style (same font, same font colour, same font size), because in the end they represent the same feature. Usually the name is rendered as horizontal text (with line wrap). Some map styles draw also a rectangular border around it. It may be useful to use for this feature the same or a similar colour and font as for residential roads, because all this serves for orientation in the local area.

Please note that in Japan, on complex traffic signal systems, the name of the traffic signal system must get rendered only once (not multiple times). An appropriate tagging for this has to be discussed. Currently, you will find often various individual nodes (on the crossing OSM ways), each of them with highway=traffic_signals and the identical name=*.