sidewalk (or pavement) is that part of a highway set aside for the use of pedestrians and sometimes also cyclists, separated from the

carriageway (or roadway). A sidewalk may be separated from the carriageway by only a

road verge or alternatively may be at some distance from the road (but still associated with it). It also may be separated from the road by some form of barrier, for example bushes or a line of trees. A road may have a sidewalk on only one side of the carriageway, or both side or have no sidewalks. The inclusion of sidewalk information can help tremendously in providing effective pedestrian routing.

In the UK, the legal term for a pavement or a sidewalk is footway. However, the term footway is used within OSM for paths in a broader sense, and the term pavement which, in the UK is often used as an alternative, is used in the US for the surface of the carriageway (which there, incidentally is known as roadway.) So because footway and pavement, the British English terms, are prone to confusion, the North American English term sidewalk gets used here, even though British English is the preferred language for OSM tagging and wiki.

There are two schemes to map sidewalks. It is advised to reach out to local community prior to engaging in extensive (re-)mapping in a different method than used in a given region.

Currently approved (not to be confused with deprecating other approaches) method that works as a refinement of footway tag (showing a 5% margin according to taginfo) is to map each sidewalk as a separate way. This method consists of drawing a new footway where there are sidewalks on the ground and adding the highway=footway + footway=sidewalk tags onto it. 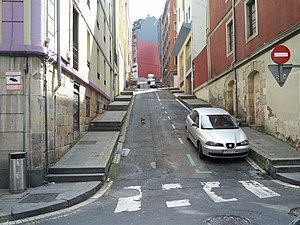 This is a hint for renderers to use special handling of sidewalks if supported. In addition, use footway=crossing for places where the footway crosses a street and place a node at the position of the kerb/curb and tag with kerb=* and its type, which provides useful information for wheelchair navigation. For more detailed explanation see footway=* page.

This method allows for a more spatially accurate representation of the pedestrian environment. In addition, it allows a more straightforward use of barrier=*, tactile_paving=*, kerb=*, and surface=*, and it is possible to indicate that a sidewalk goes over a bridge while the associated street goes over a culvert. The method produces a visible result in existing routing engines and renderers, as they will usually treat it the same manner as footways that are not associated with a road, unlike the sidewalk=* key that is rarely displayed on maps.

A drawback of this approach is that acquiring a name of the associated street in an automated way is challenging. Some mappers therefore add name=* or street:name=* tags copying the name of the street to separately mapped sidewalks. In addition there are more complex proposals of Relation:associatedStreet and Relation:street that allows assigning names to sidewalks. There is no consensus on whether this is necessary, and regional customs differ.

Crossing only on explicitly marked crossings may be sometimes desirable, examples including wheelchair users, countries where pedestrians may not cross roads at any location legally, people who anyway prefer cross roads at explicit crossings. In some countries by law any residential road intersection contains pedestrian crossing even if not marked by a street sign or road markings. Sometimes people would prefer to allow crossing smaller roads at any point along the road where it is legal to do so. If you wanted to build a router that allows that then you would need more sophisticated processing.

In addition, the associated street/highway can also be tagged with sidewalk=separate see below.

Sidewalk as refinement to a highway

This method consists of adding a sidewalk=* property onto sections of an existing road to indicate, where it has sidewalks.

Supported values for the key are sidewalk=both/left/right/no (none gets used synonymously to no). Designations of left and right are relative to the direction of the way. Properties of the sidewalk can be added as sub-tags on the street, for example: sidewalk:left:width=3 m, sidewalk:left:kerb=raised, sidewalk:right:bicycle=yes, sidewalk:both:surface=paving_stones.

For a number of users, crossings and their properties are of just as much importance as the sidewalks themselves: A highway=crossing node is to be added to the line representing the road, where there is one.

As this method is geared towards places, where sidewalks mostly are attached with merely a kerb, it does not aim at providing detailed geometric information. There is no rendering in the standard openstreetmap view for data contributed that way either. Still, the contribution helps pedestrian routers in determining the suitability of where they are sending users. Not the least, because this method also allows to indicate the absence of sidewalks on streets, on which they are usually taken for granted; This alone makes up most of its raw usage in the data.

Most eminently, this method provides for nicely narrated directions from routing programs, as the name of the street can be easily spelled out in the itinerary. Furthermore, free crossing of streets anywhere can be easily implemented, a function that is desirable by many. This method also lends itself favourably for tagging quests in craft mapping apps.

On the other hand, things can get messy e.g. at complicated crossings, where sometimes separate footways have to be introduced to manage the complexity. In 2017 missing OSM Carto rendering of sidewalk tags was reported as an issue in their source code repository but the effort went nowhere[1]. Nevertheless, mapping sidewalks with a sidewalk=* tag is a popular long-standing and de-facto practice with good editor support and a number of data consumers make use of it. 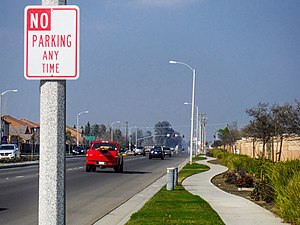 A serpentine sidewalk in California forms a road verge of varying width beside a straight road. Some sidewalks meander or even zigzag as a design feature or to avoid large trees.

The presence and width of a road verge (berm, curb strip, tree lawn, etc.) can be tagged as verge=* and verge:width=*, respectively. If the sidewalk meanders instead of maintaining a consistent distance from the roadway, recording the curves can be significant for calculating an accurate travel time for pedestrians; however, if the sidewalk is only represented by tags on the roadway, the roadway would need to be split into very small increments. Instead, consider mapping the sidewalk as a separate way, to avoid making the roadway unmaintainably complex.

Cycleway and footway on sidewalk

In some cases sidewalk is also a cycleway. In such situations following methods are used

In some regions one of these tagging schemes is clearly more popular than other. In such case it is strongly preferable to continue mapping using established method. For example in Warszawa, Poland large part of sidewalks are mapped using separate way scheme, without copying road names. Changing this would require massive amount of work and would be unlikely to be considered as a good idea by local mappers[2]. In place where majority sidewalks is mapped using tags on roads one should not start mapping footways as a separate ways without consultation with a local community.

In the early days of openstreetmap, there was no specific method to map sidewalks. Actually, there was no method to map ways for pedestrian use at all. This latter deficiency got remedied by popular usage of the highway=footway tag. Its wiki article dates back to January 2008. There was still no method to specifically map sidewalks then, though footways sometimes got used to this effect, especially, where they were physically distinct features on ground.

Beginning some time in 2008[3], people started annotating streets with sidewalk=* tags, especially so, where sidewalks were perceived to be physically indistinct features on ground, thereby following the "One feature, one OSM element" good practice principle. Again by popular usage, this "refinement of the highway" approach became a first method, to specifically have that information in the openstreetmap database.

Continued extensive mapping of separate footways alongside of roads and streets, in 2011 prompted the "refinement of the footway" approach[4], by annotating such ways with a footway=sidewalk key. Although conceptually quite different, from the point of view of the objective, this tool made both methods informationally roughly equivalent, in that the presence of sidewalks on ground was clearly indicated, so it got approved by community vote. Historically it became known as the "separate way" approach of mapping sidewalks, after the practice it set out to heal.

Comparing popularity of mapping with sidewalk=* and as a separate way with raw usage count such as taginfo is not helpful for multiple reasons.

Comparing usage count often works for comparing popularity of tag schemes, for example for shops. But for sidewalks it is not really working, as

Overall, due to all those distortions, all what raw usage count analysis can do is to confirm that both methods are actively used.

Below some pictures meant as an aid in determining, where the "sidewalk" annotation should be justified, ranging from the least controversial to conditions where, perhaps only consulting with the local administration can give an explicit ruling.

Below are some pictures of roads that may be classified differently from country to country.
For further information see discussion. 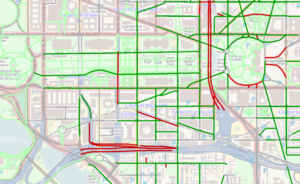