From OpenStreetMap Wiki
Jump to navigation Jump to search
Tag:highway=motorway link - Other languages

Use highway=motorway_link for link roads (sliproads / ramps) leading to and from a highway=motorway. These normally have motorway restrictions. These are commonly referred to as On-ramps and Off-Ramps in American English.

Mapping a motorway link is quite easy. In the first example (image 1) you can see a dual carriage motorway where another way (green) branches off. This green way should be tagged with highway=motorway_link and oneway=yes. Place the node where the green way branches off at the exit of the motorway as shown in image 2.

The second example (image 3) shows a more difficult junction. In this example you can leave the highway and enter it. For this create 2 different ways (orange) and tag them separately with highway=motorway_link and oneway=yes. Be sure to check the direction of the arrows. If there is no physical seperation (e.g. grass) in a part of the motorway_link you need the green way. In this example that green way can be tagged with highway=motorway_link and oneway=no.

At motorway exits, add the junction number or name. 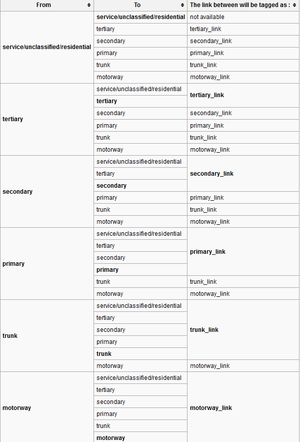 A parallel motorway carriageway (US: parallel lanes) such as a collector/distributor road or physically separated HOV lanes / reversible lanes should be tagged as motorway_link. If the major road is classed as trunk or principal, then that class of _link shall be used instead.

In the United States, this is not applicable. The consensus and position of the DWG in the United States is that motorway_link is based on physical characteristics alone, and that they end where the ramp meets the surface street regardless of direction or use by other transportation modes.

In the US, there are some motorway_links like this for which motorway regulations technically end somewhere before the end of a ramp, and may have sidewalks or other pedestrian features. These are still to be tagged as motorway_link all the way up to where the ramp physically ends at an at-grade intersection.